Whew!  I guess I haven’t updated in a while.  It looks like a lot of running when you put it all together like that.

Last month a dear patient stopped by my office to bring me this sketch she had made for me.  She was at the Boston Marathon to watch her son race.  (He also runs for charity.)  I was so touched!  Isn’t it marvelous?

Jane and Family:
We’ve had a wonderful summer so far.  The kids spent the month of July at Deer Lake, a nearby day camp which becomes like a second family to us every summer.   Then we just spent the past two weeks visiting Todd’s family in Canada.  They live in Winnipeg, Manitoba, but we spend nearly all our time at Todd’s parent’s cottage on the Lake of the Woods.

We arrived at Echo Bay on the Lake of the Woods late on a Saturday, but early enough to visit with Aunt Debbie and her son, Bobby, to meet our neighbor’s new baby (three-week old Mark!) and for a quick swim.

From this point on we lost track of the days!  They were filled with…

…Gorgeous Canadian weather.  Bright, breezy and warm days and cool nights.  An occasional summer storm passed quickly, and one left a beautiful rainbow behind.  Several hot and sunny days we spent entirely on the dock.  We only had a couple of overcast or rainy days in the whole two weeks we were at the Lake.  (And we needed these days for resting—we kept so busy!) 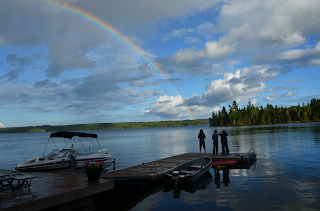 …Lots of critter encounters (including watching a dock spider, who we named Charlotte, hatch her egg sac), though none was quite as memorable as our meeting with the local snapping turtles.  Charlie is an enormous, pre-historic-looking creature we figure to be decades old who is often seen in our end of the Bay.  On the same day that Charlie came to visit our dock, our neighbors showed us the baby snapping turtle (who they dubbed Speedy) they had discovered in another part of the Lake.  They both caused quite a stir!

…Visiting with loved ones is the best part of our visits to Canada.  We got to spend time with Todd’s family, particularly Grandma and Grandpa, who generously allowed us to invade their cottage for so many weeks!  We spent many afternoons visiting with friends nearby, and even boated to the island of friends who live in another part of the Lake.  The neighbors with whom Todd grew up now bring their own children to visit the Lake, so we have multiple generations of friends on each dock in our end of the bay.  All of the kids travelled together between docks, enjoying the special features of each one (slide at the Stewart’s, rope at the Rigby’s, diving board at the Fast’s…)
We took walks together along the Lake road when the weather was cool, and every night we had different combinations of friends and family with whom to play Bananagrams (an Echo Bay tradition in recent years).

…Plenty of training runs for me, many with my nephew, Bobby.  I managed to keep up with him even though I'm over 150% his age ;)
While I was running, Todd was staying fit on his bike. 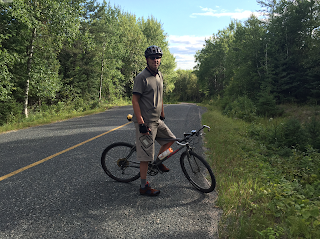 …Swimming, swimming, and more swimming.  The kids were like fish, and were oblivious to temperature (or fatigue!)  Watching the Olympics in the second week of our trip only spurred them on further.  One day they arranged races between our dock and the neighbors (about 50 meters).  Helen and Alec competed in a 200-meter medley, in several freestyle races, and Jane even joined in for the 50-meter breaststroke.  I was exhausted just watching them!  Grandma treated them to hot chocolate and popcorn afterward <3
Incidentally, it was fun to watch the Olympics on the CBC, and to experience the games from the Canadian athletes’ perspectives.

…Diving (and other forms of plunging into the Lake), particularly from another neighbor’s springboard.  Here the kids branched out from Olympic standards to compete in categories such as Best Cannonball and Best Pencil-Dive.  We also learned of the perfect cliff from which to jump into the Lake.  Neighbors had previously investigated an area across the bay (and confirmed adequate depth of the water!) and had even left a rope for mounting the cliff.  We had lots of fun trying to synchronize our jumps for the camera.
The cliff was not far from a shallow reef, which the kids could explore with snorkels. 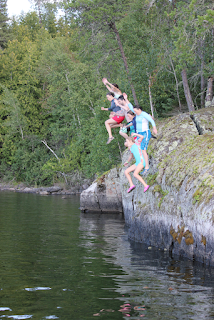 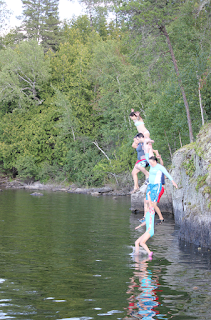 …Paddling in the paddle boat, kayaks, and canoes (Grandma joined us in each of them!) around the island in the bay, along the shore, and into the marsh behind the cottages. 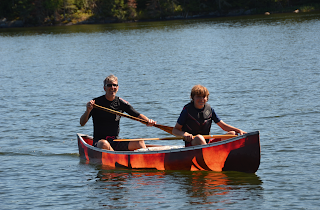 ...Sailing!  Our dear friend, Linda, shared with us her small sailing trimarans.  In the usual sailing style, she took the kids for tandem sails and let Todd sail solo—but even more fun was Linda’s pirate version of trimaran tag!  Linda, Helen, Jane, and I (the No-Beards) boarded one boat while Alec and Todd (the Potential-Beards) boarded the other.  The object of the game was to hit the opposing team’s craft with one of two “cannonballs” (Nerf-type balls).  We sailed for hours, circling each other while the kids jumped into the Lake to retrieve lost cannonballs as they floated by, and then hauled themselves back onto the boats as they sailed past.  What fun!

...Boating.  No visit to the Lake of the Woods is complete without a boat ride (or two) to the Rockeries for ice cream and other treats.  This year Todd also started giving me (and Helen, and even Alec) boating lessons so that he isn’t the only one who knows how to drive the boat.  And for the first time in many, many years we took a boat ride all the way to Kenora—a ride of just under an hour.  Kenora is the largest “city” on the Lake of the Woods, with a population of 15,000.  We were tickled to pull up to the grocery store by boat!


...Wake boarding, skiing, tubing.  Alec in particular caught the wake-boarding bug from his father, and was up behind the boat nearly every day.  Todd got in several runs on the board and on skis, and I even put in my annual requisite turn :)

NF Update:
Now that I’m back home (for work… Todd and the kids get to stay in Canada for another week!) it’s time for me to get back to fund raising for the Children’s Tumor Foundation.  My first fall race is the New Haven Half Marathon on Labor Day—only three weeks away!  Shortly thereafter in October is the Hartford Marathon—my TENTH marathon!!  If I can run ten marathons to help end NF, you can help by DONATING.  Here’s our fund-raising link:
www.KRath4Jane.com