1.       Possibly Little Rock Marathon in early March.  I've continued training since the Marine Corps Marathon this fall with the thought of running a local marathon (in Hyannis, Mass) at the end of February, but it just seems like it would be so cold then!  Arkansas in March would be warmer, plus it would be an official Children’sTumor Foundation race.  The only problem with this race is logistical—coordinating travel to a far-away marathon with my work, three kids, and a husband who travels for his work is tricky…
2.       The New York City Half Marathon with the Children’s Tumor Foundation.  This would be my fourth NYC Half with CTF.  I was almost going to skip it this year because the route has changed significantly, but I don’t know how I could give up running a race through Times Square and Central Park!
3.       A friend suggested the Flying Pig Marathon in Cincinnati in early May.  It’s the event’s 20th anniversary. I already know two other CTF-affiliated friends running this race, though it’s not an official CTF race.  I think this would my third choice of all the May/June races I’ve listed (see below).
4.       The Vermont City Marathon at the end of May.  This is not an official Children’s Tumor Foundation event, either, though I could still use it to fund raise for CTF.  I really enjoyed it last year, despite the hills.  Plus, Meb Keflezighi, the beloved long-distance runner, is running it this year!  I suspect this will be the late spring race I pick.
5.       The Manitoba Marathon in June with MBNF, the Manitoba Neurofibromatosis support group?  This marathon is in Todd’s hometown, Winnipeg, Manitoba, Canada, and is completely flat.  The website boasts, “Our route is so flat we’ve earned bragging rights and don’t require an elevation map! With a maximum elevation change of only 3 metres (10 feet), well, look at your table top and that’s what you’ll get!”  Again, logistics would work against this one.
6.       The New Haven Half Marathon on Labor Day (it will be my 10th year in a row!) with CTF.  This is a definite.
7.       The Marine Corps Marathon in October, again, with CTF.  I loved that race this year!  I want to run it one more time before moving on to Chicago for 2019 :)  It's such a shame so many good races happen in October.  I want to hit them all before I have to retire!
8.       Depending on how the rest of the year goes (and how tired I am at that point) I might even try to do the Philadelphia Half or Full.  (Emily?  Tobias?  Any interest?)  It's been on my radar for a few years, but it always comes a little too soon after the October races.  However, they have the coolest medals--little Liberty Bells that actually ring!  Plus, it's driving distance from CT.

I have a week or two to think about all these options, but hope to have a plan in place by early January.  Watch this space!

Jane Update:
It’s been a busy social media year for Jane and NF Awareness.  This spring, Jane was featured in the National Cancer Institute’s Cancer Research Center’s Neurofibromatosis Awareness Month posts.  This fall she has figured prominently in the Children’s Tumor Foundation holiday campaign!  Check out their website here, and see some of their social media posts below. 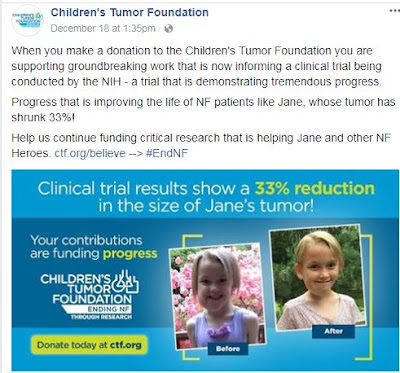 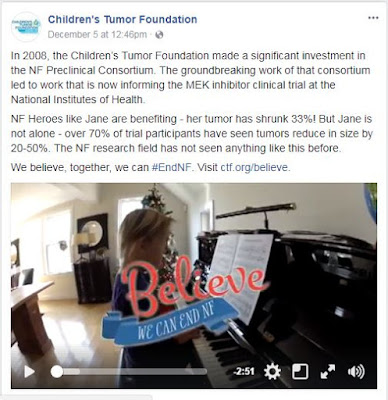 Here is a link to the showcased video. 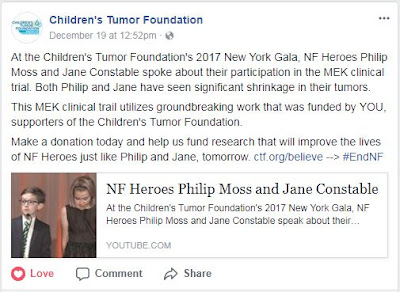 NF Update:
I’ve never quite been able to articulate exactly why making people more aware of neurofibromatosis is so important to me, but educator Sam Drazin, in an article for the Boston Globe, summed it up perfectly for me:
“Awareness is the foundation for empathy.”