Running Update:
Still plugging along.  115.5 miles to go in order to reach 1000 this year
NF Update:
Yesterday the kids had a half day of school, so we visited Todd at work so that Jane could have another practice MRI before her next real MRI at NIH in December.  She hopped right up on the MRI exam table, instructed Todd as to how to arrange the pillows for her head and knees, and allowed herself to be pushed into the scanner without a second thought.  I sat next to her so I could hold her hand, or tap out a rhythm on her foot along with the sounds of the machine, or pass Puppy to her if she wanted to snuggle him.  Once again she stayed still for 30 minutes’ worth of imaging!  Bring it on, NIH—Jane’s ready for a non-sedated scan!!

Some random thoughts on hair…
Jane's chemotherapy makes her hair thin and brittle—this is why we keep it short (so you don't notice the bald patches as much).  It also has the curious effect of turning her hair blonde.  While this style might suit Jane, and while some people might think having blonde hair is a perk, it is a constant reminder to me of the powerful medications we are putting into her body.

Don’t get me wrong—I am very grateful that this medicine seems to be keeping her tumor stable, and that it doesn't have some of the awful effects of some of the other chemo she's taken in the past (frequent nausea, vomiting).  But it still makes her itch terribly at times; it affects her taste, and makes her tire more easily.  And I look longingly (perhaps even though she's doesn't seem to) at all the other little girls she knows, with their hair in flowing pony tails.

I feel a pang every time someone compliments her hair, because it's all I can do not to blurt out, "It's because of her chemotherapy!  I wouldn't have it this way if it were up to me!"  But that's not fair to the well-meaning individual.  After all, she does look adorable, and how would anyone else know it’s because of chemo?  These are thoughts I sometimes struggle with.

Jane (and family) Update:
The fall soccer season ended this past weekend with a bang.  All three kids had games, as usual, and then we had a chance to see both the Yale Men’s and Women’s soccer teams play their last home games of the season!  It was a late night, with the Men’s game going into two overtimes (it ended in a tie against Brown), but very exciting.  The kids were even allowed on the field after the game to talk with the players and to get their autographs :) 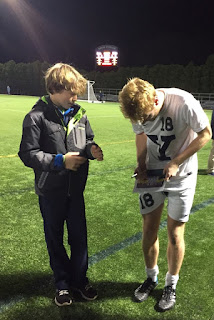 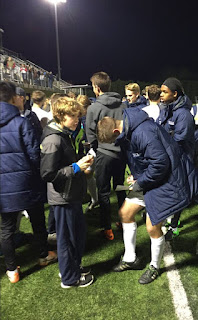 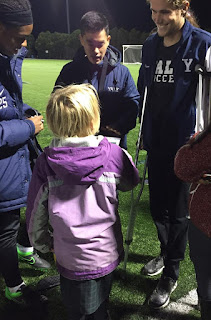 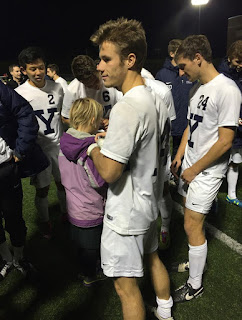 Readers of this blog may have noticed that Helen has become more camera shy of late, so here are a couple of pictures of Helen in action on the soccer pitch.  She plays defense, and has a remarkable kick! 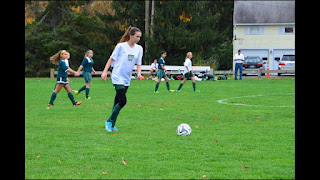 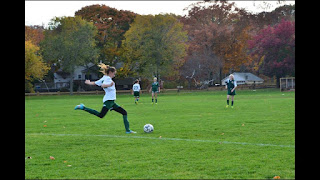 Yesterday I ran in the inaugural Madison Half Marathon and had a wonderful experience.  There were over 1000 runners—quite a turnout for a first race!  It was a beautiful day and a great course, starting at Hammonassett State Park, traveling along the Shoreline Greenway Trail, and following the surfside roads in Madison.  I had expected to run without my family there, but my mother surprised me by waiting for me at the finish line.  (Best Mom Ever.)  And I set a personal record!  I always worry after a disappointing race (eg Hartford 2015) that I’m getting too old for racing, but yesterday’s half marathon gave me new hope that I’m not done yet!

NF Update:
Jane’s blood work and check-up at NIH were all good this month.  We’re planning one more practice MRI at home in about a week in preparation for December’s (hopefully) non-sedated MRI.

An exciting development at the Children’s Tumor Foundation this week:  Bobby Gill was selected for the cover of Runner’s World magazine for the month of November!  Gill is one of the founders of Cupid’s Undie Run, a huge fund-raising event that benefits CTF in which participants run about a mile, in their underwear, in February!  Since it started in 2010, Cupid’s Undie Run has spread to over three dozen cities in the US and abroad, and has raised over 8 million dollars.  See the story behind the cover here, or visit www.cupidsundierun.com

Of course, if you would like to donate to the Children’s Tumor Foundation, you can always do so through our fund raising site :)  www.krath4jane.com
Posted by NFE Mom at 2:41 PM No comments: