I’m a little slow and low on mileage so far this month due to winter weather and a wretched virus, but I’m still plodding along.  Five weeks until the NYC Half, and nine weeks until the Boston Marathon—yikes!

Despite the cold this weekend, I got my long run in, and I beat my previous miles-over-degrees record by running 14 miles in 0 degrees F yesterday!  (The last time I recorded running more miles than degrees was February 13th last year, when I ran 7.6 miles in 7 degrees.)

The above, of course, is all on top of my undergarments, which is more than I can say for my many NF-fighting friends who participated in Cupid’s Undie Run (www.cupidsundierun.com) this weekend!  It is a “mile-ish” run in one’s underwear that takes place in cities all over the US, Canada, and Australia for Valentine’s Day.  Brrr!  The great thing is that all the proceeds go to the Children’s Tumor Foundation.  This event alone has raised millions of dollars for CTF in the past few years!

On another note, I stopped running with headphones about a year ago (I think I’m faster without them) so I haven’t updated my running playlist in a while.  However, I’ve had a few running-related songs rolling around in my head during my training the past few months, so I’d thought I’d share them.  (You can see some old selections from my playlist here, here, and here.)

Ra Ra Riot “Water”
Key Lyrics:  “My face was numb, my lungs were sore, but still I [ran] until my feet could touch the [finish]” (particularly appropriate given yesterday’s frozen run)

The Struts “Could Have Been Me”
Key Lyrics:  “Wrrrapped in your regret, what a waste of blood and sweat.  Oh!  I wanna taste love and pain.  I wanna feel pride and shame.  I don’t wanna take my time, don't wanna waste one line.  I wanna live better days, never look back and say, ‘Could have been me.’”

Cold War Kids “First”
Key Lyrics:  “…you were there first” (OK, this song isn’t really about running, but it’s a good mantra for focusing on the end of a race.  Plus the tempo is the perfect pace for a long run.)

Jane Update:
February has started off with two extra-long weekends thanks to a couple of snow storms and the President’s Day holiday.  The first weekend we were treated with a visit from my Aunt Anne.  Every year, as a birthday gift to me, my aunt and my mother get together at my mother’s house and invite my kids for sleep over.  This is not just any sleepover—they make up a “hotel” complete with check-in, itinerary, and meal menus!  Todd and I had a rare dinner out together and even caught a movie in the theater :) 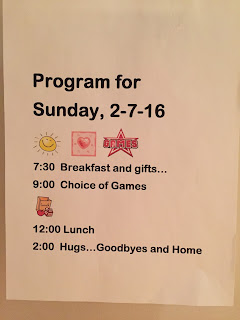 Today the kids and I drove up to Providence, RI to visit the Roger Williams Zoo.  Visit a zoo in February, you ask?  Yes—and we had a blast!  The zoo has lots of indoor exhibits, and I was surprised how many animals were actually still outside. 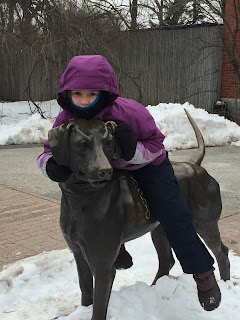 NF Update:
I am honored to say that I was recently awarded the first annual Garrett Baumann Heart of a Champion Award from the NF Endurance Team! 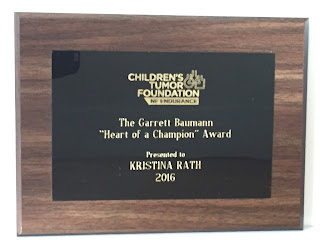 Garrett Baumann is a young man from San Diego who was diagnosed with NF2 when he was 11 years old.  Neurofibromatosis, type 2 (NF2), is very similar to the NF1 that Jane has.  Like NF1, NF2 causes tumors to grown on nerves throughout the body.  However, in addition, the auditory nerve is almost is always involved with tumor in NF2, leading to hearing loss.

Garrett has numerous tumors in his brain, up and down his spinal cord, in his arms, hands, and other parts of his body.  As a result of NF2 he has undergone countless surgeries, radiation, and chemotherapy, has lost his hearing and voice, and is in constant pain.  In the past few years he has been, in fact, fighting for his life.

Since Garrett was diagnosed, the Baumann family has relied on family and friends for support.  That is why they formed Team Garrett (http://teamgarrett.org/), a group of people who walk and run for Garrett in various races, from 5Ks to marathons, locally in California and even all over the country, to raise money for the Children's Tumor Foundation.  One of the most incredible things about Team Garrett is that it not only consists of his immediate family but also members of the Baumann’s church, neighbors, friends, and even strangers who joined the mix when they learned about Garrett.  The team is over 100 strong and this will be their 4th consecutive year running for him and raising funds for CTF.

To read more about the award, see the announcement here (http://www.ctf.org/item/nf-endurance-inaugural-heart-of-a-champion.html)  I am humbled to have been chosen to win the first award that bears Garrett’s name <3
Posted by NFE Mom at 7:12 PM No comments: