It’s been quiet on the blog front this summer, but that is about to change heading into to last weekend of summer.  (I won’t bore you with all the details of my training this summer—I’ve just listed the totals above.)  We’re gearing up for our first race of the season, the first day of school, and an upcoming trip back to NIH, all within the next week or so.

The New Haven Road Race Half Marathon is on Labor Day.  It will be my TENTH New Haven Road Race in a row raising funds for the Children’s Tumor Foundation.  I’ve been doing this—running and fund-raising—for TEN YEARS!  Thank you all for supporting me through it!  I’ve still got a few years left in me, I think :)

Unfortunately, Labor Day is supposed to be hot and humid this year, with a high of 87 F forecast.  Yuck!  I’ve already started coaching myself that I’ll have to run slowly and make lots of water stops.  Hopefully I’ll listen to my own advice.

NF Update:
This summer there were two big news items regarding NF and the MEK-inhibitor, selumetinib, which is the medication Jane takes.  The Children’s Tumor Foundation (CTF) reported on them both, and Jane played a role in both!

On July 25th Congress held a hearing regarding the implementation of the 21st Century Cures Act and the National Cancer Institute’s Cancer Moonshot, a plan to accelerate cancer research to make more therapies available to more patients, while also improving the ability to prevent cancer and detect it at an early stage. Speaking before the House Energy and Commerce Committee of the U.S. House of Representatives, Dr Ned Sharpless, Director of the National Cancer Institute (NCI) was asked by Missouri Congressman Billy Long, “Can you tell us about the most exciting thing that is being supported in the Cancer Moonshot?”

Read the article, which includes a video about Jane, here.  Watch the Q&A with NCI Director Ned Sharpless here.

Less than a week later, on August 3th, selumetinib was granted orphan drug status in Europe!  (Jane’s photo accompanied the article.)  It had received orphan drug status in the US and Canada earlier this year.  I’ll remind you, since plexiform neurofibromas are rare, to date there has not been great financial incentive for pharmaceutical companies to develop treatments for these tumors. However, Orphan Drug status means that the manufacturer of selumetinib (Astra-Zeneca) can get monetary support to continue researching and producing the drug.  Good news!

Readers of this blog will remember that after our last check-up at the National Institutes of Health in March, Jane’s doctors recommended gradually increasing her dose of selumetinib because some areas of her tumor had shown some growth, and because Jane had grown so much herself in the past year.  As a result, we hit a milestone in Jane’s selumetinib experience: we’ve changed pill colors!  Jane had started with a white, 10mg capsule which went from 2 a day, to 3 a day, and finally to 4 a day over the past 6 months.  The next step was the blue 25mg capsule!

We’ll find out if the increase has had any effect when we return to NIH next week, and whether we’ll continue to increase her dose.  Happily, Jane has had no increase in side effects so far.

Jane Update:
We’ve had a great summer.  The kids spent the month of July at Deer Lake Camp in the town next to ours, Helen as a Counselor-in-Training, Alec in the Wilderness School, and Jane as a camper.  Our family loves Deer Lake!

Then we spent a wonderful two weeks visiting our Canadian family at the Lake of the Woods. 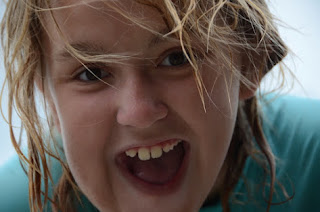 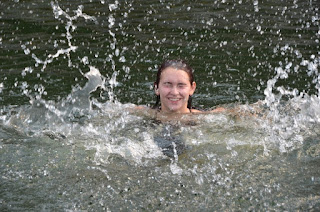 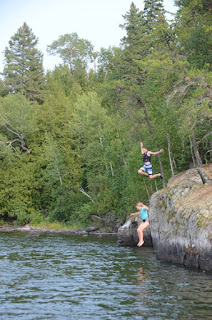 I hope everyone's had a wonderful summer and has a fun Labor Day weekend!  If you'd like to donate to our race, you can do so here:
www.KRath4Jane.com