Running Update:
Less than a month until the Vermont City Marathon.  I’ll be running 26 miles on May 26!  I have one more 20+ mile training run this weekend, then I start to taper.  It’s nice to have the spring weather arriving in time for my long runs.  You can always donate to our campaign at www.KRath4Jane.com

NF Update:
Some exciting news this month regarding Jane’s study medication, selumetinib.  One year after being granted orphan drug status, the US FDA has granted Breakthrough Therapy Designation for selumetinib to treat pediatric patients with NF1 and plexiform neurofibromas.  This means that selumetinib is put on a “fast track” for approval, and it guarantees more intensive help from the FDA to meet that goal.  Here are some of the social media posts about the announcement, including one from the National Cancer Institute featuring Jane’s medical team, and one from the Children’s Tumor Foundation featuring Jane herself!


In other NF news, the Atlantic has produced short documentary about NF celebrity Adam Pearson and his identical twin brother, Neil.  Although they share the same DNA, their appearances are vastly different; each suffers from neurofibromatosis, but the condition has affected them in divergent ways. They tell their story in this deeply moving 11-minute video.

At one point in the video, Adam’s mother comments that when Adam was a small child, before he was diagnosed with NF, “I noticed something, when he would eat sometimes that side of his face used to redden up and I took him to the doctors and they said, ‘No its fine, it’s a blocked saliva gland.’”  This struck a chord with me because it is exactly what we noticed about Jane when she was just six months old, and we got the exact same response from a doctor.

Jane (and family) Update:
April was a busy month for Jane and our family.  First of all, Jane turned 12! 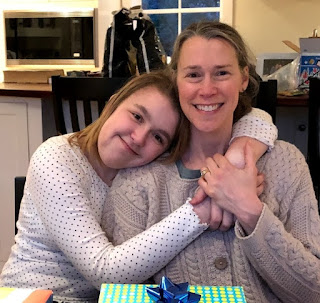 Then our family spent our April break in Iceland, a first time visiting this country for all of us.  With volcanoes and glaciers side by side, it truly is the Land of Fire and Ice!


Finally, Helen attended her high school Junior Prom this past weekend.  The rain held off just long enough for us to get some great photos of her and her friends <3