One month until I run the Marine Corps Marathon in DC for the Children’s Tumor Foundation. I’m into my final stretch of training.  One more 20+ mile run before I start to taper.  We are not yet quite at our fundraising goal for the year—if you haven’t had a chance to donate, you can do it here now!
www.KRath4Jane.com

A tremendous thank you to all who have already given!

Jane Update:
Jane is back to school and settling in to 7th grade.  She is at a new school this year but is finding her way around and very much liking her new teachers.


Two weeks ago, Jane saw the podiatrist to have the outer sides of her big toenails removed to treat and prevent the recurrence of the infections caused by her study medication, selumetinib.  We were very apprehensive before the visit, but it could not have gone any better. The doctor was lovely and kind, and told Jane everything that he would be doing and why.

(An aside, while we were waiting in the exam room Jane noticed the various instruments that were laid out for the doctor.  When he came into the room she asked, "Is that a dremel?"  He was surprised and impressed, and said that it was, in fact, a dremel, but that no 12-year-old had ever identified a dremel for him before.  Jane told him that her grandparents in Canada have one, but we reassured him that it was a wood-carving kind, not a foot-carving kind.  He laughed.)

The pinches for numbing medicine were unpleasant, but after that Jane didn't feel a thing.
To distract her while the doctor was operating, I let Jane use my phone to do some New York Times crossword puzzles.  She would read aloud the clues she couldn't answer, and the doctor and I would chime in!  Crossword puzzle lovers--you would have liked him.  He knew that 6-Down "Gangster group in Tokyo" was "The Yakuza" and that 20-Across "Maker of the Rio and Sorento" was "Kia".  He even gave Jane several extra pairs of disposable socks because she had admired the ones he had put on her.  We were both so relieved.

We weren’t sure how uncomfortable she would be when the numbing medicine wore off, but the doctor reassured us that Tylenol would be sufficient to help it.  After such a good visit we were inclined to believe him, and he was right—Jane was fine.  Not only that, but he gave Jane the go-ahead to play soccer after just a few days!  The season has only just started, and we were worried she’d have to be out for a couple of weeks.  But Jane ended up missing just one practice, and didn’t miss any games with her team, and her toes haven’t held her back at all.

We had a follow-up visit with the podiatrist today and he said that Jane’s toes were looking good.  Hoping now we will get the green light to start back up on selumetinib.

One week until we finally return to NIH.  I’ll be sure to report back on our experience.

NF Update:
The first week in September I got to meet Vanessa Martin, the founder of the ChildhoodTumour Trust in the UK!  Vanessa was traveling with her daughter to the Children’s Tumor Foundation’s annual NF Forum in San Francisco and had stopped on the East Coast for a week of sightseeing.  We met up in New Haven at Claire’s Corner Copia for lunch!  What a pleasure to meet them. 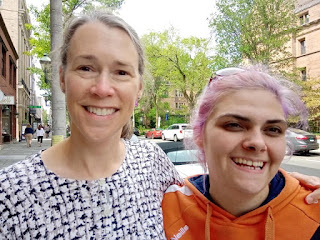 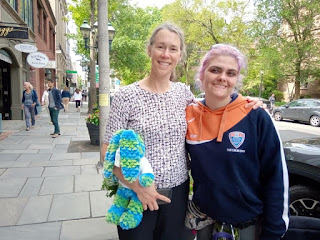 Just completed my 11th New Haven Road Race half marathon!  (Technically, the first half-dozen or so were 20Ks since the NHRR didn’t offer the half marathon, which is 21K, until 2016.)  It was a good day.  Not a PR, but I had fun, and I finished 13th out of 50 women in my age group!  Here are my thoughts about the race, mile by mile: 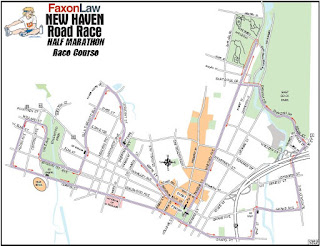 Mile 1  The New Haven Road Race is always hot and humid because it takes place in New England at the end of the summer.  This year, however, we had a bit of a breeze and some cloud cover which made a huge difference compared to last year when it was sunny and almost 90 degrees.

Mile 2  You can’t beat the New Haven Road Race for its spectators.  Of course, some of the bigger races in cities like Boston and New York have larger numbers of spectators, but I think if someone calculated the spectator-to-runner or spectator-to-city-population ratio, New Haven would give some of the bigger races a run for their money.  Plus, people are getting up early on Labor Day—their last day off of the summer—to watch us!  How dedicated is that?

Mile 3  I saw my friend Glennda at the corner of Ella Grasso Boulevard and Whalley Avenue and got a huge hug from her!  It’s always hard to pick out people among the spectators because there are so many and because we run by so quickly, but Glennda and I managed to spot each other.  She was recording the race and shared with me the moment we spied each other.

Mile 4  There are more than a dozen musical groups along the half marathon route, some live bands, some DJs, and even bagpipes!  By this point in the race I had heard a great song from one of the DJs and it stayed with me for the rest of the race.   (To whoever was DJ-ing near the water stop early on the Boulevard and played “Heaven Must Be Missing an Angel” by Tavares , THANK YOU!)


Mile 5  In Westville I saw the best spectator sign of the race: “If Andrew Yang is still running, you can, too!”

Mile 6  The longest straight stretch of the race is on Chapel Street, which runs right past the Hospital of St Raphael, my old stomping grounds where I delivered babies for 15 years.   I thought I heard someone cheering my name from 4th floor window, which is the Labor Floor, but I wasn’t sure if I was imagining things.  I learned later it was two good friends with whom I had worked, Lynne and Andrea <3

Mile 7  At the corner of College and Chapel Streets I saw none other than NF Endurance Team Manager Extraordinaire, Angela Dumadag!  I almost missed her without her trademark green wig!

Mile 8  In Wooster Square I saw a digital sign that looked like a mile marker clock, but instead of showing a time, it kept alternating between “6” and “7”.  I wondered what it was until I noticed that it was next to speed limit sign.  It was measuring the speed of the runners in miles per hour!

Mile 9  Another DJ in Wooster Square nearly knocked Tavares out of my head with “Good Vibrations” by Marky Mark and the Funky Bunch.  A great song to get one pumped up for the final few miles of a race (but I’ll just share the audio—the original video hasn’t aged that well, in my opinion.)

Mile 10  In Fair Haven I heard the theme from Rocky!  Rule 2.15 from The Runner’s Rule Book by Mark Remy (Rodale, 2009) states that in any given race, “You will hear the theme from Rocky”.  (You don’t need a link to know this song.  See?  You’ve already got it in your head!)  Yes, it’s trite, but by this point in the race I was getting tired, and honestly in my delirium I found this song so inspirational, I thought I might cry. 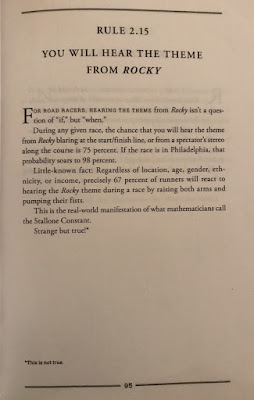 Mile 11  For its first 37 years the New Haven Road Race included two events: a 5K and 20K race.  In 2016 it added the half marathon while keeping the 20K.  The half marathon route simply has an extra 0.7-mile loop inserted into the 20K route around the 11-mile mark.  The 20K and half marathon participants run the first 10+ miles together, then right after exiting East Rock Park the 20K runners head south on Whitney Avenue towards downtown while the half marathoners head north for the extra 1 kilometer.  It is a bit dispiriting to see half of your fellow runners suddenly break off towards the finish line while you have to run in the opposite direction!

Mile 12  Just after Whitney Avenue turned into Temple Street, I saw my friend Dave (college classmate and now Head of Berkeley College at Yale!)  Dave has run the NHRR for many years, also, but had finished before me this year.  He ran with me for a block or so to give me the courage to make it to the finish line.

Mile 13  The finish line and my family waiting for me at the New Haven Green! 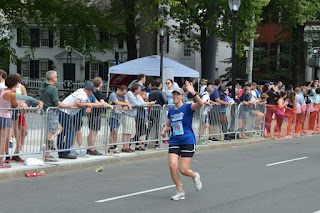 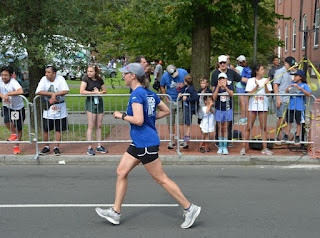 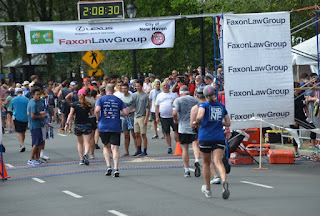 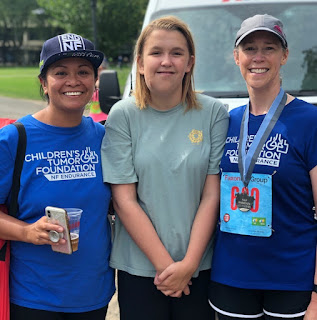 Jane/NF Update:
We have lots coming up this fall.
~ Tomorrow is the first day of school for Jane and the kids.
~ This week I’ll get to meet Vanessa Martin, founder of the ChildhoodTumour Trust!  She’s visiting the northeastern US ahead of the 2019 NF Conference in San Francisco this month.
~ Next week Jane will have a minor surgery on her toes to hopefully put an end to these pesky paronychia!
~ At the end of this month Jane and I finally return to NIH for her semi-annual MRI and check-up.
~ Next month: The Marine Corps Marathon in DC!
Stay tuned!