So much news this week, including holiday pics, Jane’s interview, Hogwarts, and Boston!

After a week and a half off from running and some overindulgence on my mother-in-law’s delectable baking over the holidays, I’m a little slower than usual, but I’m back in training.  I’ve got my race schedule planned for the year, and am thrilled to say that it includes the Boston Marathon again!  I am honored to be running for Neurofibromatosis Northeast, (www.NFIncNE.org), group serving New York and New England that is dedicated to finding a treatment and cure for NF by promoting scientific research, creating awareness, and supporting those affected by NF.  Readers of this blog may recall that I discovered this wonderful organization during the 2014 Boston Marathon when I almost gave up at mile 17 (you can read about it here).

According to Rule 1.26 of The Runner’s Rule Book by Mark Remy, training plans must be printed and posted on the fridge, so here’s my plan for Boston: 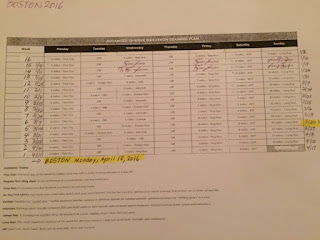 If you’d like to make an early donation to our 2016 campaign you can do so here (www.krath4jane.com)!

In other exciting running news this week (which perhaps also belongs under the NF Update), my secret, nerdy ambition has been realized:  Jane and I were featured in the blog of the Hogwarts Running Club!  The HRC (www.HogwartsRunningClub.org) is a relatively new charitable organization that organizes virtual running events inspired by the Harry Potter wizarding world.  It is designed to promote exercise while raising money for deserving charities in order to accomplish their mission of “changing the Muggle world one mile at a time”.  In its first two years, Hogwarts Running Club has raised over $420,000 for deserving charities, benefitting the lives of veterans, animals, literacy campaigns, and children battling illness.  I was so pleased with how the post turned out!  You can read it here.  You’ll enjoy it even if you don’t love Harry Potter :)

NF Update:
Last month I wrote about our participation in the Haddam Killingworth High School Annual Holiday Telethon, this year benefitting the Children’s Tumor Foundation.  For those of you who couldn’t see the show when it aired, here is the link to Jane’s segment (about 10 minutes long, but worth the time to watch her sparkly personality!)  To remind you, this well-done piece was created by two high school students!  All in all the telethon raised $18,828.42 between the original broadcast and the re-airings the following week.  It takes me a whole year to raise that much!  We were so grateful for the opportunity to work with this talented group.

Jane Update:
Finally, some pictures from our holiday trip to Winnipeg.  The snow and cold may not seem as impressive now that the eastern US is in the middle of the season’s first blizzard, but keep in mind these were taken while it was 60 degrees in Connecticut :)