Running Update:
Today was the inaugural OutRUN38 Branford Half Marathon!  Congratulations to the OutRUN38 organization for a great day.  What a fabulous turn out of volunteers, supporters, and spectators for a very special cause, the support of adults living with cystic fibrosis.

It was hot, humid, and hilly race!  I confess I started out too fast and by mile 9 I was starting to fade.  I was just debating whether to stop and walk when I heard a familiar voice call my name.  It was my friend, Melanie, from Massachusetts!   Melanie had recently moved back to Connecticut, but I had no idea she was running the Branford Half today.  Despite knowing each other for years, and despite a shared love of running, we’d never managed to race together.  That is, until today!   Having Melanie by my side gave me renewed energy, and we ran the rest of the race nearly step for step, and crossed the finish line together.  What a wonderful surprise!

Thanks to Melanie for urging me on.  Thanks also to my aunt for making a special trip from Boston to help watch the kids while I was off racing; to my mom for coming to collect me after the event and helping me with the kids while Todd is away; and as always, to my running partner, Neil, and his ever-supportive wife, Marcia.

Jane Update:
Jane and I head back to NIH for four days on June 10th for a big visit:  re-staging MRI, echocardiogram, EKG, eye exam, blood work, and physicals.  The AZD6244 seems to be doing its job, but as regular readers of this blog know, I always get apprehensive before these visits.  Past experience has made me cautious about being too hopeful!  Trying to think positive thoughts.

NF Update:
NF Awareness Month is coming to a close.  Thank you for your support!  I hope I was able to educate everyone a bit more about neurofibromatosis.

Up for June—the start of our 2015 fundraising campaign for the Children’s Tumor Foundation!  I’ve got a new (streamlined) link to our fundraising page: www.krath4jane.com   I am hoping to be able to use this same link year after year, so you’ll never have to wonder where you can donate :)
Posted by NFE Mom at 6:42 PM No comments:

Phew!  Haven’t updated in a while, I guess.  Tapering now before the OutRUN Half Marathon next weekend, though I confess I haven’t strictly adhered to my training plan the past few weeks.  It should be a fun race, nevertheless.

Jane Update:
Had wonderful news from Jane’s ear doctor earlier this month.  We hadn't seen him in about a year--since we had started AZD6244. The doctor said he could notice an improvement in her ears: Last year he could only see a sliver of Jane's ear drum on the right; this year he said the canal is normal caliber!! He also could no longer see the tumor bulge on her palate!! Hooray!  We return to NIH for Jane’s next MRI scan in about two weeks—hoping for just as good news then.

Speaking of MRIs, Jane made a Lego mock-up of the radiology suite of a hospital for her Career Day at school (she's a doctor).  I like the brain image on the MRI screen and the abdominal ultrasound probe!  A sign Jane knows a little too much about MRIs:  The morning when she brought the diorama into school she looked at it ruefully and said, "I shouldn't have put glasses on the guy in the MRI. They're magnetic." 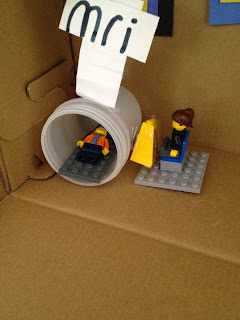 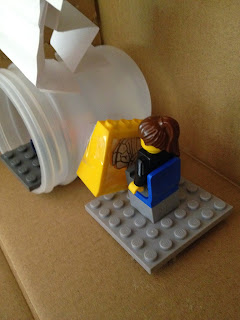 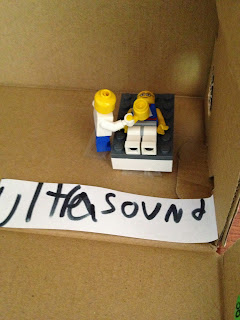 NF Update:
May is NF Awareness month!  To that end, I am reproducing my daily NF facts into one table for easy reference :)
·         Neurofibromatosis encompasses a set of distinct genetic disorders that causes tumors to grow along various types of nerves.
·         NF can also affect the development of non-nervous tissues such as bones and skin. Neurofibromatosis causes tumors to grow anywhere on or in the body.
·         Each child of an affected parent has a 50% chance of inheriting the gene and developing NF. The type of NF inherited by the child is always the same as that of the affected parent, although the severity of the manifestations may differ from person to person within a family.
·         There are three forms of neurofibromatosis:  NF1, NF2, and schwannomatosis, each cause tumors to grow on nerve endings in or on the body.
·         1 in 3000 people is affected by Neurofibromatosis type 1, 1 in 25,000 is affected by NF type 2, and about 1 in 40,000 is affected by schwannomatosis.
·         The severity and physical signs of NF1 can vary widely from patient to patient. People who have NF1 may have very few neurofibromas (tumors) or they may have thousands of them throughout their body.
·         NF1 and NF2 are called autosomal dominant genetic disorders. Half of all cases are inherited from a parent who has NF1 or NF2; half of all cases are not inherited but the result of a new or spontaneous mutation.
·         Although most cases of NF1 are mild to moderate, NF1 can lead to disfigurement; blindness; skeletal abnormalities; dermal, brain, and spinal tumors; loss of limbs; malignancies; and learning disabilities.
·         NF1 also has a connection to developmental problems, especially learning disabilities, which are five times more common in the NF1 population than in the general population.
·         NF1 can result in disfigurement in a number of ways. Skin neurofibromas may develop on the face or on exposed areas of the arms or legs. The larger and deeper plexiform neurofibromas may grow around the eye or eyelid, or affect growth of one side of the face. Scoliosis, or curvature of the spine, can affect appearance when it is severe. Rarely, an overgrowth of skin or bone causes enlargement of an arm or leg.
·         Some people with NF suffer from a bony defect called tibial dysplasia, in which the leg bones are curved.
·         Another complication of NF is pseudarthrosis, in which a bone breaks, typically a long bone such as the femur, and does not fully heal, causing a "false joint".
·         People with NF are at increased risk of high blood pressure and renal artery stenosis.
·         NF can also affect the cardiovascular system causing congenital heart defects. The most common heart defects seen in NF are those affecting the heart valves, particularly the pulmonary valve.
·         Café-au-lait spots, the most common sign of NF, are the flat, pigmented spots on the skin, which are called by the French term for coffee (café) with milk (lait) because of their light tan color. In darker-skinned people, café-au-lait spots appear darker in color than surrounding skin. People with NF almost always have six or more café-au-lait spots.
·         May 17 is NF1 Awareness Day.
·         5% of NF1 patients have a bone-related issue called sphenoid wing dysplasia, in which the skull and eye orbit bony areas erode away, causing possible craniofacial abnormalities, loss of the eye, and enlargement of the eye orbit cavity.
·         About 10% of people with NF will develop scoliosis, or a lateral curvature of the spine. In most cases it is mild, but more severe cases may require surgery.
·         Approximately 15% of patients with NF will develop an optic glioma with the peak age of onset between ages 3-4 years old. An optic glioma is a tumor of the optic nerve in the brain which controls the vision
·         Many people with NF1 suffer from frequent headaches, particularly migraine headaches.
·         May 22 is NF2 Awareness Day.
·         The distinguishing feature of NF2 is tumors that grow on the eighth cranial nerve in both ears, commonly causing deafness and severe balance problems.
·         NF2 brings on increased risk of other types of nervous system tumors as well.
·         NF2 can also cause severe vision problems, including cataracts, retinal abnormalities and orbital tumors.
·         NF is not the "Elephant Man's Disease," although it was at one time believed to be. Scientists now believe that Joseph Merrick, the so-called "Elephant Man," had Proteus Syndrome, an entirely different disorder.
·         The tumors in NF are usually noncancerous (benign), but in some cases these tumors become cancerous (malignant) tumors.
·         NF related malignancy is estimated to occur in 7-12% of affected individuals. People with NF are at increased risk for MPNST (malignant peripheral nerve sheath tumor), brain tumors, and leukemia, as well as several other forms of cancer.
·         NF can cause persistent itching of the skin.
·         NF is worldwide in distribution, affects both sexes equally and has no particular racial, geographic or ethnic distribution. Therefore, NF can appear in any family.