Physically, Monday’s marathon was the worst I’ve run.  The math was not hard to do:  suboptimal training + lingering virus + poor fuel management during race = 6 hour finish.  However, emotionally there were so many rewards, which, in the end, have far outweighed my disappointing time.  I will start with thanks all around, from the beginning of the marathon to the end. 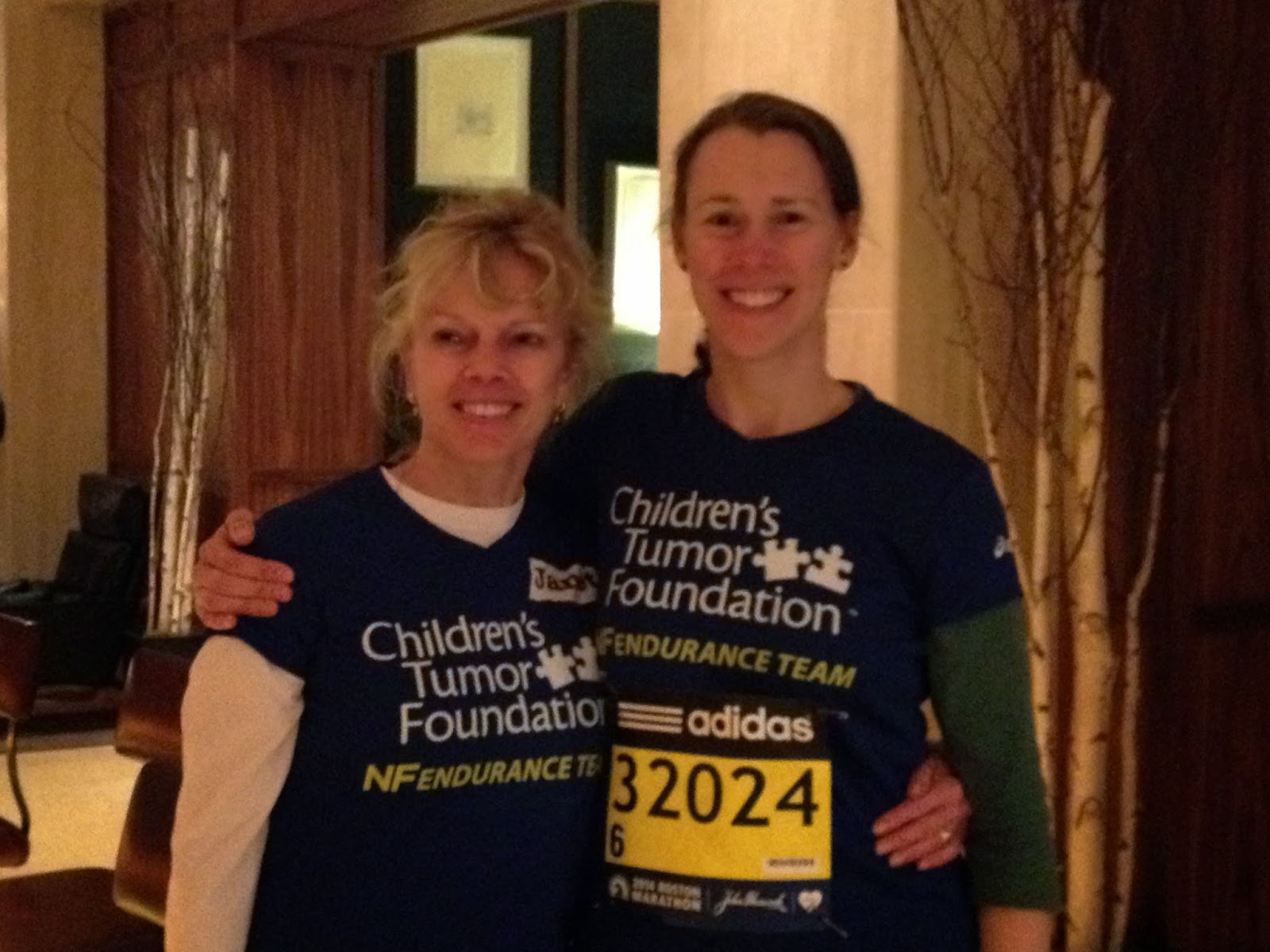 This is me with Janet, another member of the NF Endurance Team.  Janet was running in honor of a colleague’s son who has NF.  Janet and I met last year at the start of the Boston Marathon when we noticed each other wearing the same shirts!
Like me, Janet was nearly at the finish line on Boylston Street last year when the bombs went off.  She was thankfully unhurt, and was invited to return to the race this year, like all of us who didn’t finish.  This year, Janet made a point to seek me out the day before the race (having to chase me all around Back Bay as my family and I got into Boston later than expected) so that we could take another picture together.   I can’t thank her enough for being part of our team.

Next, thanks to my friend and neighbor, Holly.  Holly is a mother of four whose oldest son is in my son’s class.  She was at the Boston Marathon running for the New England Patriots Charitable Foundation.  Having Holly’s company on the walk to the Common, the interminable bus ride to Hopkinton, the wait at the athletes’ village, and the walk to the start made the day even more special.  Last year I was lonely and nervous at the start.  This year Holly made it fun!

My crazy cousins also have my everlasting gratitude!  When I was little and said my prayers at bedtime, I used to thank God for my mother and father, my sister and brother, and my “dozens of cousins”.  (My mother was the youngest of eight children growing up in South Boston and Dorchester.)   This year my cousin Bob ran the Boston Marathon for the Dana Farber team, and several of his sisters and their families came out cheer for us.  His sister Marie (who ran the Boston Marathon in 2012 in honor of my daughter Jane and the Children’s Tumor Foundation!) is a member of the Greater Framingham Running Club, which helps to maintain the mile markers along the race route.  As a result, I had cousins to greet me at mile markers 1, 2, and 3!
With all this love, I started the race on a high.  However, by mile 8 I could already tell something was wrong by the feeling in my stomach and my legs.  Eight miles is a typical daily run for me—I wouldn’t normally feel this weak or tired until at least twice that distance.  I started walking through the water stops.  I promised myself if I kept running to the half (mile 13) I would allow myself to walk after that.

I walked from mile 13 to mile 17, but was fading quickly.  Then I noticed a group of spectators with signs reading “NF:  Going the Distance”!  It wasn’t a logo I recognized, but I ran over to let them know I was running for the NF Endurance team.  They asked me how I was doing and I confessed that I didn’t think I could finish.  They sat me down, gave me something to drink, and offered to let me use their phone.  This lovely group included two other NF moms—Michelle and Melissa—who were at the race cheering on their family members who run with Neurofibromatosis Inc. Northeast, another organization supporting research, awareness, and advocacy for NF.  If I hadn’t bonked, I never would have met these wonderful people.  Maybe some things do happen for a reason :)

I called my husband, Todd, to let him know my state, and we puzzled about how we could meet up if I dropped out of the race at mile 17.  It seemed logistically impossible.  I decided I would walk to where I knew another of my cousins was watching the race at mile 20, the bottom of Heartbreak Hill.  I could see how I felt by then, and get a ride home with her if necessary.

At that moment two members of the NFNE team—Jeff and his niece, Hilary—came by.  They offered to walk with me, and despite my protestations that I would hold them back, they waited for me.  I walked with this family for many miles, and surely would not have finished without their help and encouragement.  I am so grateful to have met them!
This leads me next to thanks for Mary.  My cousin Mary is also marathoner and, along with my cousin Marie, had helped me prepare for my first Boston Marathon.   When I found her at mile 20 I felt like I had found a guardian angel.  She told me that I had to decide what I wanted to do, for me.  I wanted to finish, but was worried that by then my family had already been waiting four hours for me.   I was worried the kids would be restless, that they needed to get home so they could get to school the next day.  My decision to carry on solidified when I talked to Todd.  He told me, “Don’t worry about us.  If you want to finish, finish.  We don’t mind waiting.  And Helen wants you to finish.”

It was this thought (and maybe the flat soda Mary gave me, too!) that buoyed me on.  I ran up Heartbreak Hill and ran for most of the rest of the race.

Enormous thanks go now to the People of Boston.  Last year I had been amazed by the outpouring of support and cheer from the spectators along the marathon route, but I was doubly so this year.  In addition to cheers and signs and offers of water and food, so many people thanked me for running, for making Boston Strong.  Thanked me!

Because I had fallen so far behind, by the time I reached the final few miles race volunteers were beginning to clean up the streets of water cups and debris, but people we still cheering!  The course was still packed with spectators.  Words can’t express how heartbreakingly bittersweet it was to run the last four-tenths of a mile that I couldn’t last year.  I cried when I saw Boylston Street and all the crowds there—still cheering for every single runner who came by more than six hours after the race started.

Crossing the finish line in the Boston Marathon is something I will never forget, ever.  I don’t think I even realized how much it would mean to me to be able to finish what I started in 2013.

I think part of what drove me to finish was demonstrate to my kids how important it is to persevere.  And I couldn’t bear the thought of not crossing the finish line, after all this time and effort, knowing I won’t likely be back in the Boston Marathon again. 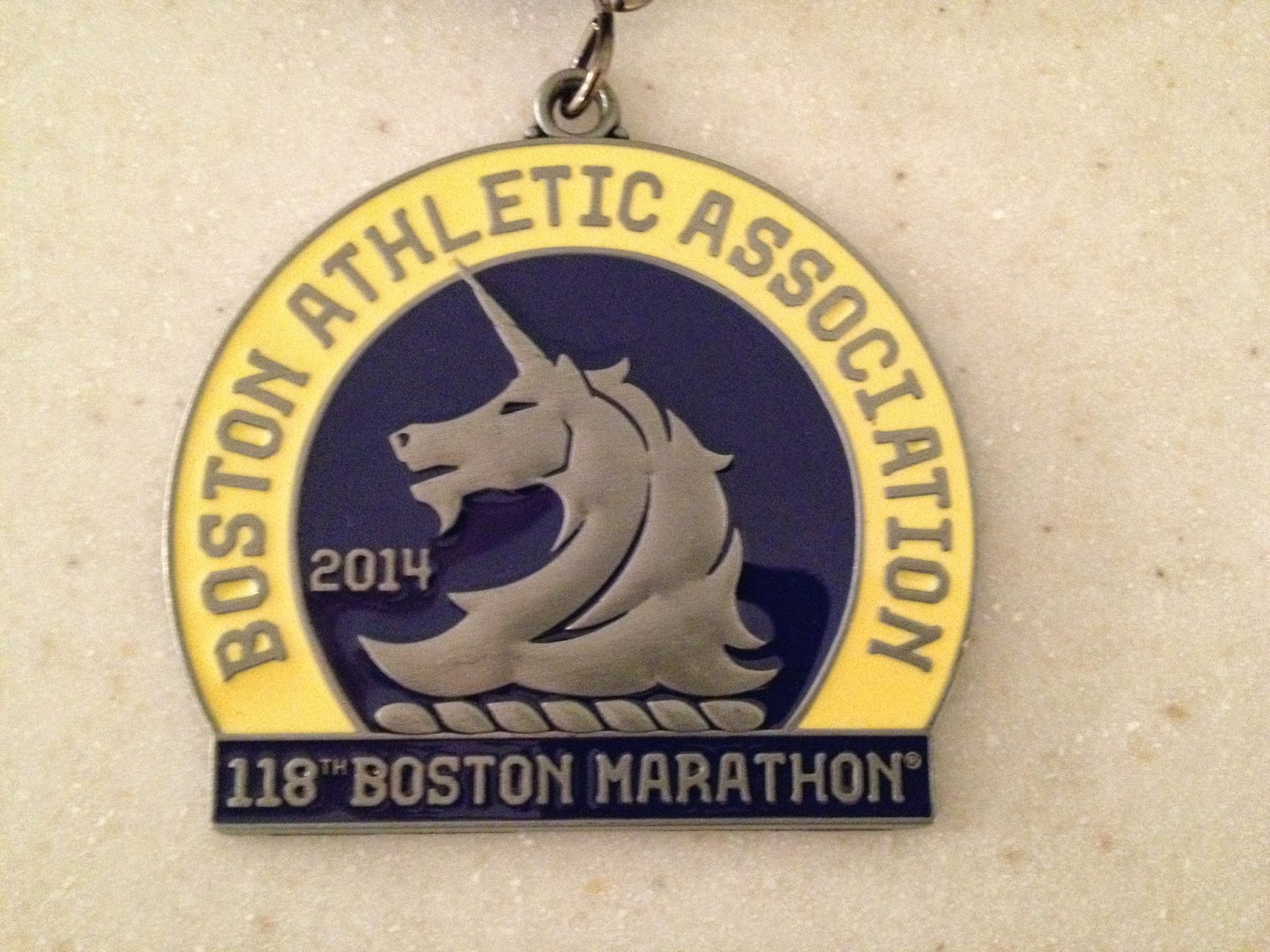 Final thanks go to my mother and her sister, Anne, for nervously waiting so long for me while standing on aching feet; and to our good friends Marcia and Neil—my virtual running partner, who stayed to see me finish after running the marathon himself.  The most special thanks go to my husband, Todd, for putting up with my crazy running habit and for carting our kids to distant cities so I can race; and to my children for waiting like angels for so many hours to see their Mom chasing her dreams.
~~~
This experience was a little lesson to me that one really does have to prepare properly for a marathon!
…And that I'm moving out of my house if anyone gets sick before the Hartford Marathon in October ;)

PS.  The photo of Jeff and me has taken on a life of its own.  A friend of mine from CTF saw it on my Facebook page.  She forwarded it to the President of the Children’s Tumor Foundation, who forwarded it to the Director of Neurofibromatosis Inc. Northeast!  It has been labelled “We’re All on the Same Team When It Comes to Ending NF”.
Posted by NFE Mom at 8:13 PM 7 comments:

OKGo “This Too Shall Pass”
Key lyrics:  “Better run like hell when you hit the ground.”

NF Update:
We’re about to complete cycle 2 (eight weeks) of AZD6244 and Jane is still tolerating the medication fairly well.  It has done a number on her skin (awful itching, rashes) but nothing more.

At one of Jane’s recent specialist visits:
Intake Nurse:  “Under ‘medications’ you wrote ‘AZD6244 twice a day by mouth’.  Do you know the dose?  We really need to know the dose of her medicines.”
Me (what I am thinking):  Are you kidding me?  I told you it was experimental.  NOBODY knows the dose of this medication.  I could say 140.6 micrograms and it would be meaningless to you.
Me (what I actually say):  “Two tablets.”

Jane Update:
Happy news—Jane turned seven!  We had a celebration at home with family on her birthday, then had fun at a party with friends a few days later. 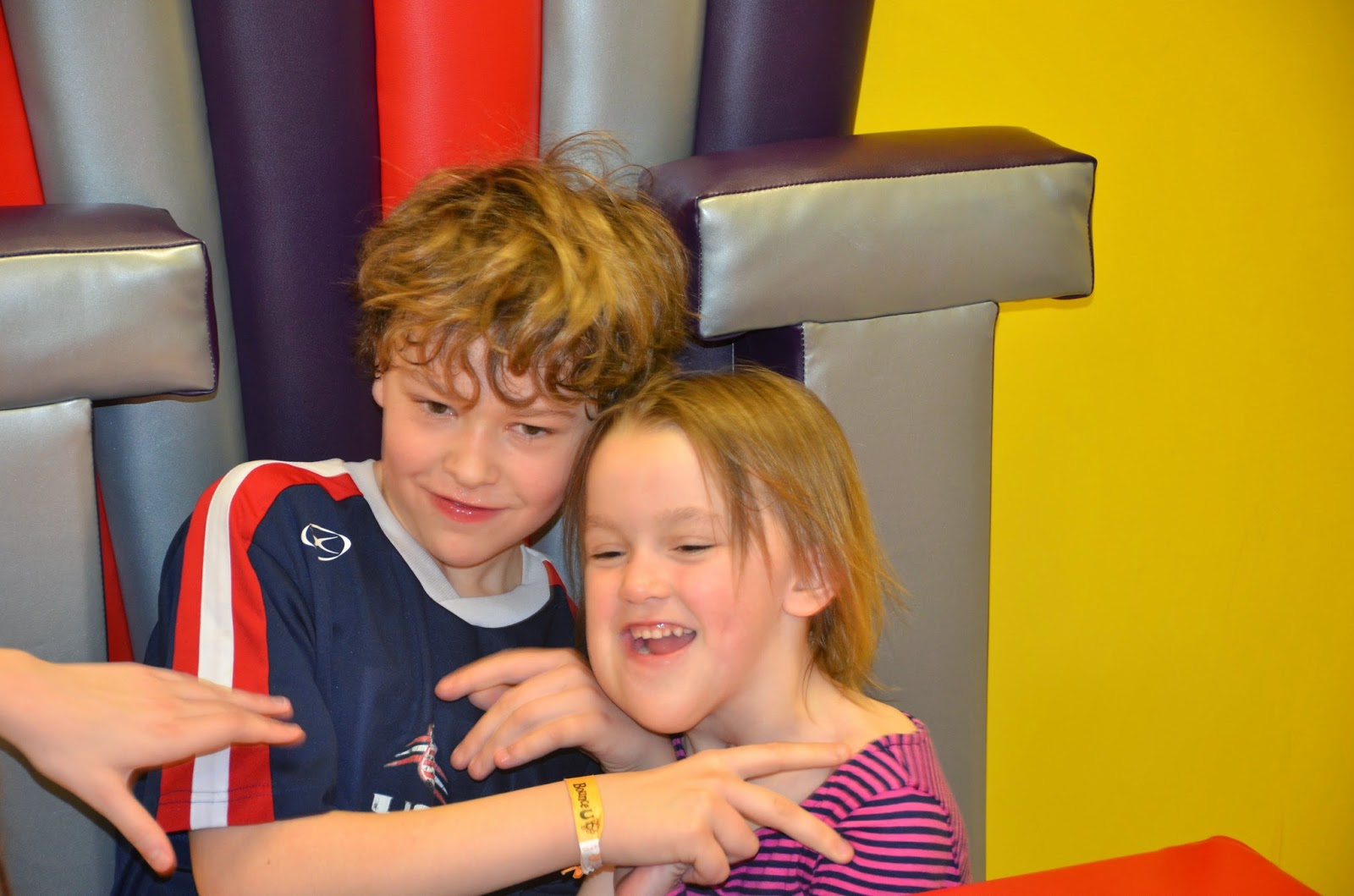 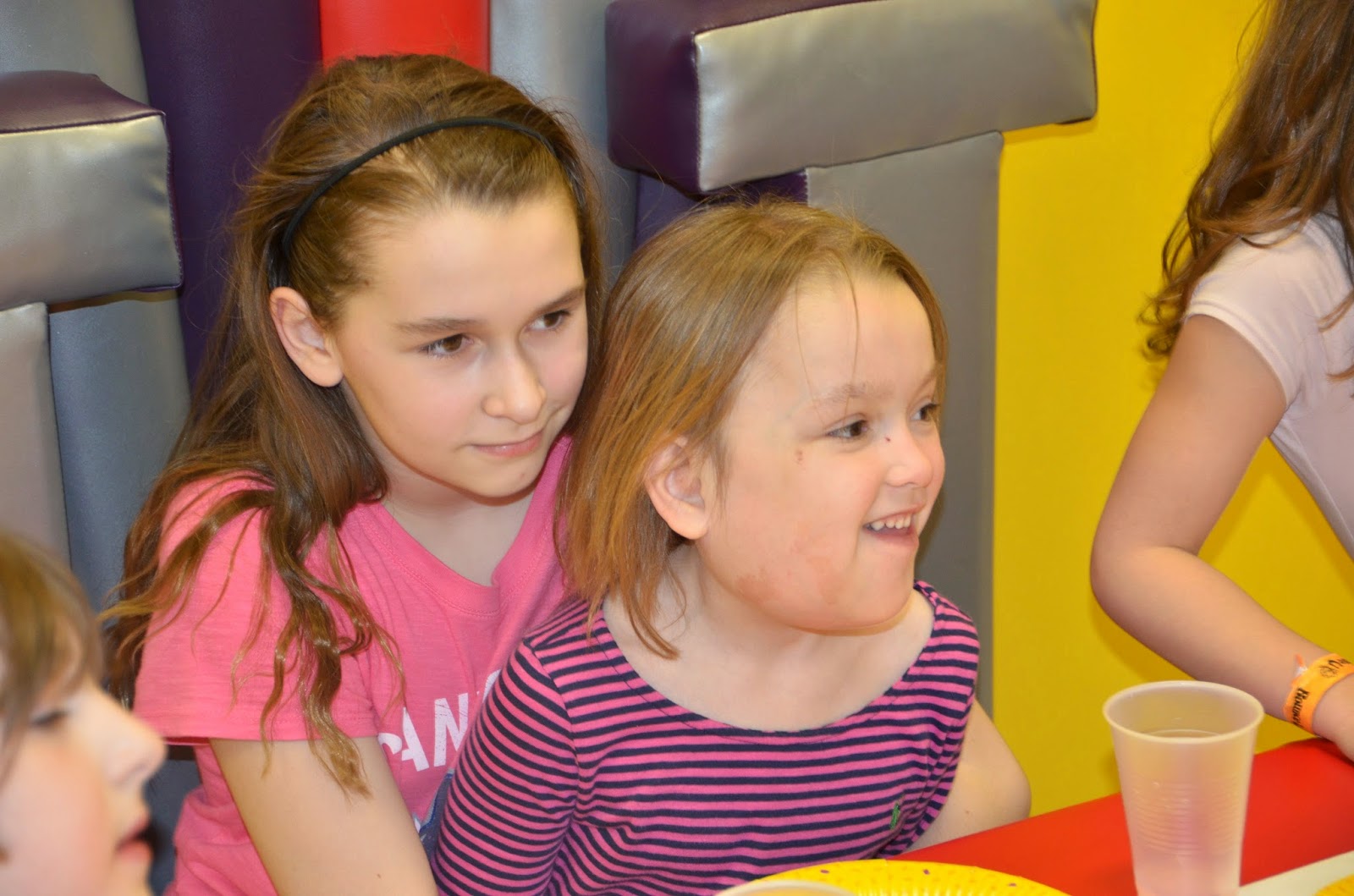 My Day Off, part II
(To see part I, go to my original blog, and read the post from 2/27/13.)
6:15am Rise, dress.
6:30am Wake Jane to take her medication, then tuck her back in to sleep.
6:30am Wake Helen and Alec, prepare breakfasts, make coffee, pack lunches and backpacks, get Helen to bus for 7:30.
7:30am Wake Jane.  Ensure that Alec and Jane are dressed appropriately and fed.
8:15am Get Alec to bus.
8:30am Bring Jane to pediatrician for clinical trial-mandated biweekly check-up.
9:15am Bring Jane or clinical trial-mandated biweekly blood work.
10:00am Check Jane into school.  Meet with Jane’s teacher, principal, reading specialist, and school nurse to update them regarding Jane’s status.
11:00am Remain at school to help out with Reading Centers in Jane’s class.
12:00pm Back at home, inhale lunch.
12:30pm Run 7.1 miles, shower, change.
2:30pm Return e-mails, return calls for work.
3:30pm Pick up kids from school, supervise the start of homework.
4:30pm Bring Alec to swimming lessons.
5:00pm Help Helen make red velvet cup cakes with cream cheese frosting for a school event.  Prepare dinner.
6-6:30pm Dinner.  Must finish dinner by 6:30 so Jane can take her medication on an empty stomach at bedtime.
6:30pm Clean kitchen, supervise more homework, piano practice.
7:30pm Baths for kids, bedtime stories.
8:30pm Tuck kids into bed.
9:00pm Evening computer work:  review test results, prepare charts for office tomorrow.  Update blog.
11:00pm Collapse into bed.

Next post with be after Boston!  I hope to have a good report and lots of pictures :)
Posted by NFE Mom at 11:37 AM 4 comments: