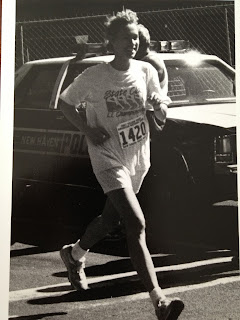 Jane update:
School started this week!  Jane started first grade at a new school, and took the bus for the first time.  All the kids seemed to have a great first day.  We’re looking forward to a wonderful year. 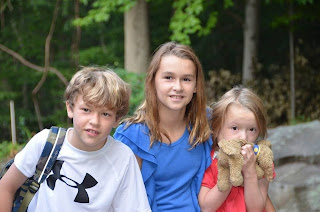 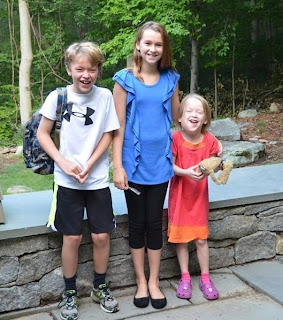 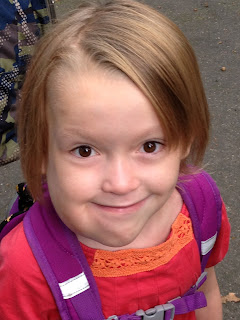 
At orientation Jane’s new teacher asked me how I wanted to handle inquiries from other children about Jane’s tumor.  I told her I was hopeful it wouldn’t be an issue, but that if another child did ask, Jane may be able answer for herself.  That night I asked Jane what she would say if someone asked why she took medicine.  She said, "For my cheek".  I asked why she took medicine for her cheek.  She said, "Because it's puffy."  I asked if she knew why it was puffy.  She said, "Because I have a boo-boo?"  I asked her if she remembered us talking about NF (which we have done in the past), but she said no.  I told her if someone asked her why her cheek was puffy, she could say, "That's the way it grew."  I told her the reason was because of NF, which is a condition that can make people's cheeks puffy or can cause other bumps.  Later, I asked her again what she might say if someone asked her about her cheek, and she said, "That's the way it grew."

Well, I didn't think the issue would come up again so soon, but when I picked Jane up after the first day of school an older boy (maybe 3rd or 4th grade) asked me (and Jane), "What's wrong with her cheek?"  Jane immediately answered, "That's the way it grew!"  (She's such a good girl!)  Unfortunately the little boy persisted (innocently), "But why did it grow that way?"  I confess I wasn't prepared!  I tell adults about NF all the time, but wasn't entirely sure how to explain it to another child, especially with Jane present.  I said, "Well, she has a condition that made her cheek grow that way."  He accepted this answer, and said, "That's too bad."

(As an aside, during my conversation with Jane the night before, she said, "Maybe I could puff up my other cheek to make it even."  I told her absolutely not!  I told her her cheeks were beautiful as they were, and not ever to believe anything different.)

I think I was spoiled having Jane in the same school for so many years!  I thought I was prepared for this transition, but obviously not.  Still lots to learn.
Posted by NFE Mom at 7:28 PM No comments:

NF update:
This week I was interviewed by our local newspaper as “Person of the Week”!  (Thank you for nominating me, Janet!)  The reporter described Jane’s experience with NF and my fund-raising efforts for the Children’s Tumor Foundation.  Here is the lovely article: The Source August 21, 2013 Person of the Week.

Jane update:
Not long ago I had a dream that I was back in medical school listening to a lecture on neurofibromatosis.  The professor described the potential complications of NF:   neurofibromas, skeletal dysplasias, optic gliomas, scoliosis, learning disabilities, pheochromocytomas, epilepsy.  I turned and found that Jane was sitting next to me, recoiling in horror at his words.  She asked me, “Is that what I have?!?”


When the article in the Source came out this week my husband Todd read it aloud to the family after dinner.  I cringed inwardly when Todd read my description of NF.  Thankfully, Jane was half-listening, focused instead on her dessert.  The big words didn’t mean anything to her.  Jane knows she has “NF” and that she has to take medicine because of her cheek, but right now that seems to be the extent of her comprehension about her condition.  Hopefully she’ll gradually discover little bits at a time about NF as she gets older, and never be bowled over with all the information at once like she was in my dream.
Posted by NFE Mom at 6:41 PM No comments:

Jane update:
I took the kids to Boston with Grandma this weekend to visit our great Aunt Anne.  (As Jane says, “She’s great in two ways!”)  We visited the newly-renovated New England Aquarium, spent a morning in the Boston Public Gardens and rode the swan boats, and visited our favorite haunt, the Museum of Science. 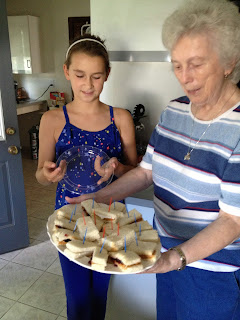 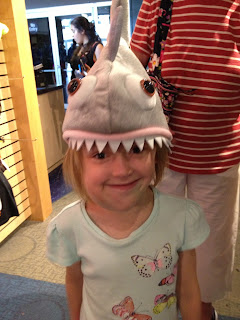 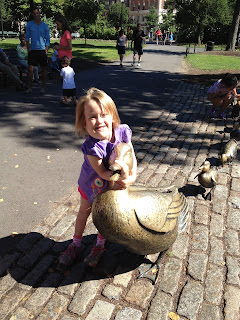 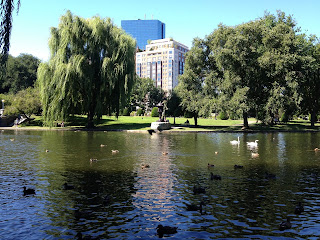 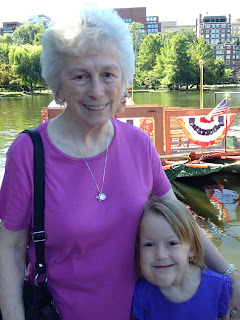 NF update:
I was recently taking care of a newly pregnant patient, a first-time mom who was very anxious, who had many typical questions about what exposures might harm her baby (e.g.  Is it safe to use mouthwash?)  I generally try to answer by describing any available research on the subject or, if no studies are available, explain the mechanism by which something is safe/unsafe (e.g.  It’s not absorbed in significant amounts into the bloodstream and therefore doesn’t cross the placenta to the fetus).  Barring that, I say “we have no evidence” that a particular exposure is harmful if there has been no association to birth defects reported.  This discussion is particularly important in cases of miscarriages which, with rare exception, are not caused by anything to which the mother was exposed.  I make sure to say this to my patients aloud, and tell them that I want them to hear my voice saying it when they wake up a 3am and their emotional brain has taken over their logical brain and they are agonizing over what they should have done to prevent the loss.  (“I shouldn’t have eaten that tuna sandwich!”)  Maternal guilt is a powerful thing.


Now imagine you aren’t dealing with a new pregnancy and worrying about exposures causing potential birth defects—imagine you actually have a child with a genetic defect that will cause her pain and suffering.  You wake up at 3am with your emotional brain overwhelming your logical (physician’s) brain and you wonder if you did one too many fluoroscopies in your first trimester because you couldn’t cancel them because you didn’t want anyone to know you were pregnant yet.  How do you deal with that maternal guilt?  You grasp at the kind, tactful words of Dr. Scott Plotkin at MGH, who reassured this new NF mom that if fluoro caused NF, we’d see much more NF in the children of fluoroscopists than we do.  (But even sometimes at 3am I don’t believe him…)
Posted by NFE Mom at 7:58 PM No comments:

Email ThisBlogThis!Share to TwitterShare to FacebookShare to Pinterest
We just spent a magical two weeks at the Lake of the Woods in Ontario, Canada visiting Todd’s family.  As there’s no connectivity in our area (a good thing!) I’m a bit behind in my blog entries...

Running update:
A total of 58.8 miles in 9:17:57.  Perfect running conditions:  sunny, breezy, dry, hilly.  One difference from running at home is my pre-run habit of strapping on bear bells—a type of Velcro bracelet with a large jingle bell attached, designed to alert any wild animals that I am approaching and thereby prevent any chance encounters with mother bears with cubs.  (Though I have heard these devices referred to as “dinner bells”.)  Another difference is my post-run habit to run directly to the lake, remove shoes and watch, and dive in!

Jane (and her family) update:
Some of the many wonderful things we did while at the Lake:  Spending time with Grandma and Grandpa.  Seeing and hearing the loons.  Jane catching minnows in her minnow trap.  Alec catching (and releasing) two jack fish in one day.  Jumping off the neighbors’ diving boards.  Kayaking up to the loon’s nest and seeing her big, brown eggs.  Canoeing around the island and to the end of the bay.  Watching a thunderstorm move across the lake.  Seeing Auntie Debbie and Uncle Mike.  Visiting with our cousin Andrea.  Summiting the climbing wall on the neighbor’s dock.  Spending time with Auntie Linda and her family!  Baking cinnamon buns.  Catching crayfish off the dock with bits of hot dogs tied to string.  Alec wakeboarding like a pro!  Everyone kayaking (even Jane).  Swimming to the neighbor’s floating dock.  Swimming in the rain.  Emptying the boats after the rain.  Hiking and gathering wildflowers.  Watching a movie and playing cards indoors on a rainy day.  Swimming in the waves of a storm.  Warming up in front of a fire in the fireplace.  Hiking to the teepee at the top of the hill overlooking the bay (and avoiding poison ivy).  Driving into Kenora to see Husky the Muskie (sculpture), get ice cream at the Dairy Queen, and play in the Canadian Pacific Train Museum.  Taking the boat to and exploring the island of good friends.  More swimming.  Todd wakeboarding.  Helen waterskiing.  More wakeboarding and skiing.  Driving the boat to the Rockeries for ice cream treats!  A catamaran ride on Echo Bay with Linda and family.  Seeing the bald eagles eating fish.  A cookout for dinner.  Eating an entire watermelon on the dock.  After dinner swimming.  Todd’s birthday!  Picking wild blueberries then eating them in Grandma’s pie.  Visiting with neighbors and their children and grandchildren.  Alec’s ride with Linda on a jet ski.  Launching model rockets off the dock.  Bananagrams!

NF update:  NO NF UPDATE!  WE WERE ON VACATION! 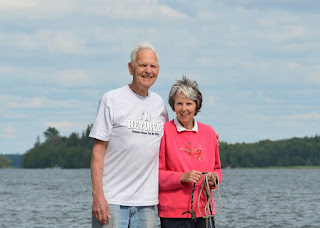 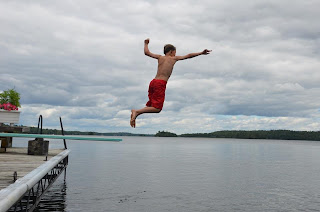 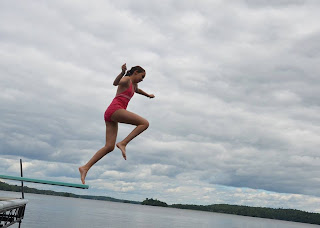 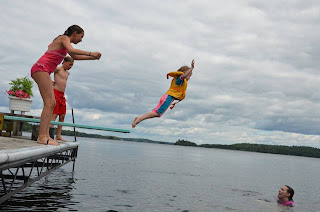 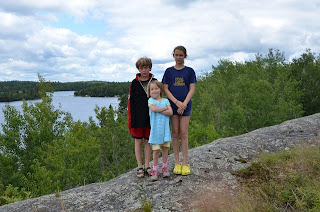 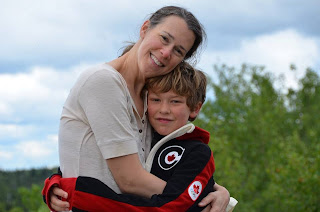 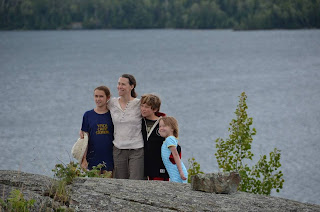 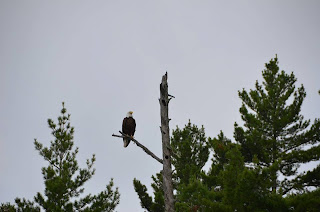 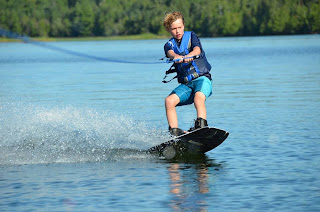 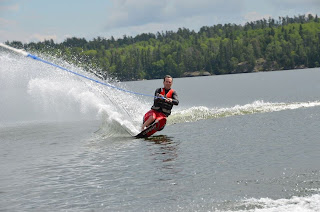 
My husband took pictures of the kids and me striking goofy poses while jumping into the lake.  My nephew took one of my pictures and made this great graphic.  Thanks, Bobby! 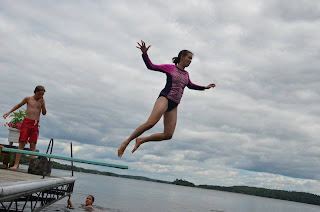 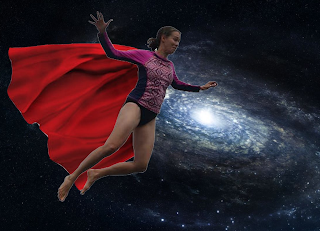