Current events have taken precedence (!) to my blogging lately, but I’m back with an update today, since NF isn’t going away anytime soon.  I’ve slowly started preparing for my spring races.  You’ll notice I’ve added swimming to my training!  I joined a Master’s Swim group this fall in the hope of improving my running performance.  We’ll see.

Here is my official 2017 race schedule to support the Children’s Tumor Foundation:

As always, our official fund raising site is www.KRath4Jane.com and it has been updated to reflect the 2017 events.

NF Update:
The New England Journal of Medicine (NEJM) is one of the oldest and most prestigious peer-reviewed medical journals.  Last month this journal published the results of phase I of the clinical trial in which Jane is participating.  Jane was “Patient 24”, and you can actually see the plot of her tumor volume in the article.  How amazing is that??

The day the article came out I showed Jane a copy of the journal.  I told her the NEJM is a famous medical journal that I read (I have a subscription, so she has seen the journal before around our house).  I showed her the cover, which lists the articles, and I pointed out the article with “neurofibromatosis” in the title.  I told her it was an article about her medicine, written by her doctors, and that it included information about her!  She plunked right down at the kitchen table and began to read through it. 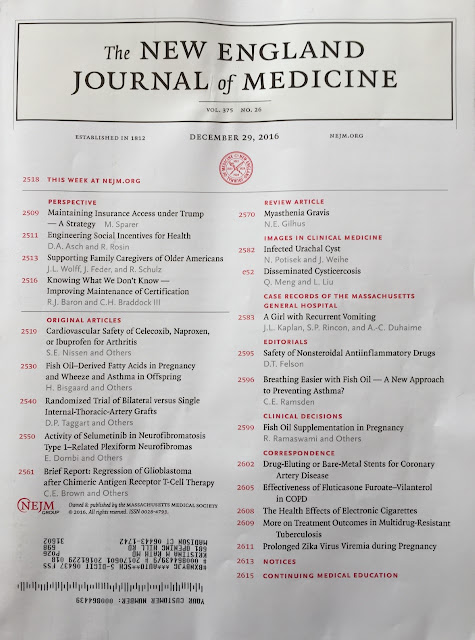 I pointed out that the article summarized the results of the first 24 children to take her medicine.  She asked, “Where does it say about the 24 children?” so I showed her the results section of the abstract.  She read “A total of 24 children (median age, 10.9 years; range, 3.0 to 18.5)…”  I told her that meant the average age to the kids was about 11 years, that the youngest child was 3 and the oldest was 18-1/2.  She flipped to Table 1 and started to read it line by line, following with her finger.


The quotes are Jane’s as she read it through:

“13 boys and 11 girls.  That’s interesting—there were more boys than girls.”

“Number of patients who had previous medical interventions…19” I said that means the number of kids who had taken other medicines for their tumors before this one.  “I’m one of them.”

“Number of previous medical interventions for treatment of plexiform neurofibroma…41.  That means 19 kids had 41 different medicines.  How many medicines did I have?”  I told her first she had shots (Pegintron), then she had the medicine from Indiana (Gleevec).  “So, I had two.”  She noted that that was the same as the median number of previous medical interventions per patient (2).

“Number of previous debulking surgeries…”  I told her that meant how many children had had surgery for their tumor.  “Not me.”

“Predominant target location of plexiform neurofibroma.  Face…4.  That’s me!”  She went on to read that one patient had a head and neck tumor, 6 had a neck and chest tumor, 4 had a truncal tumor, 8 had a truncal and extremity tumor, and 1 had a whole-body tumor.  I commented that it didn’t seem to be enough patients, but she quickly added them up and said, “Yup.  It adds up to 24.”

“Progression status.  What’s that?”  I said that “progressive” was another name for “growing”, and that her tumor was growing when we started this trial.  “Mine was ‘nonprogressive’ before, when I took the shots.  It was not growing and not shrinking.”  I said she was correct—the interferon had kept her tumor stable for about a year before it became “progressive” again.

“Documented plexiform neurofibroma-related complication at baseline.”  I told her it was complications, or problems, caused by the tumor before starting the medicine.  “Oh!” she lamented, “One child had vision loss!”  Then, “What’s ‘motor dysfunction’?”   I told her it meant difficulty moving, for example, moving arms or legs.  We noted that her friend, Travis, who has a PN in his leg, has motor dysfunction from his tumor.  I pointed out, however, that Travis was not in this particular paper, because he was not in the original group of 24 children.  “Will there be another article in the magazine after the next 24 children?”  I told her probably.  She then started counting by 24: an article after 48 children, then after 72 children, then after 96 children… :)

“Disfigurement.  Well, I have some, I think.  What does ‘disfigurement’ mean?”  I said it’s when something changes shape, like her cheek changed shape a bit because of her tumor.  She agreed.

With Table 1 done, she turned right to Table 2.


“Dose-limiting toxic effects of selumetinib.”  I told her that meant side effects that were so bad that the child had to stop the medicine.  “I had to stop it once.”

I explained what elevated creatine kinase, cellulitis, urticaria, decreased left ventricular ejection fraction, and mucositis were.  Then she read, “Rash…1 patient.  That’s me!  Maybe people will read this and wonder who was the child who got the rash!”  Then she puzzled, “It says ‘Grade 3’, but I was in grade 1 when it happened.”  I explained that “Grade 3” was referring to the severity of the rash, not her school grade :)

Figure 2A: “Which one am I?” Number 24.  She got a ruler and drew a line from her bar to the y-axis labeled “Percent Change in Tumor Volume” and proclaimed, “It’s halfway between -30 and -40, so it’s about -35.”  I told her she was correct: the maximum decrease in her tumor volume was measured at 33%.

Figure 2C: “Which one am I?”  I pointed it out—hers is the black plot in the middle graph of Figure 2C (25mg/m2)—and described the various sections: pre-medicine, Pegintron, Gleevec, selumetinib.

“I feel bad for patient 3 and patient 8.  Their tumors kept growing.”  She said, “Mine grew a tiny bit,” pointing to a brief plateau in her tumor volume after 18 months on the trial.  At first Jane thought that must correspond to the month she was off the medication.  “How long does it take for the medicine to kick in again?”  I told her I didn’t know.  She answered herself confidently: “Probably a week.  So, that’s one month plus one week…  Would that cause it to grow?”  I told her the more likely reason for the plateau was that it was around this time that she went from sedated to non-sedated scans, which would affect the way the tumor was measured.

Figure 3: “Does it say my name?  Does it have my picture?”  I explained that medical journals don’t use patients’ names or pictures of their faces in order to maintain the patients’ privacy.  “What if the tumor is on your face?”  She answered herself, “They could just cover part of it, like this.”  She covered her eyes and forehead with her hands.  I agreed, and said the journals often use a black bar to cover a patient’s eyes.

I confess seeing the study in print in a prominent medical publication has caused me mixed emotions: on the one hand, I am thrilled that we got a chance to participate in the study and that it’s had such good results.  I’m also tickled that Jane is “published” in the NEJM!  On the other hand, it reminds me that Jane was one of only 24 “guinea pigs” for the study, and that she has a unique enough medical condition to warrant a report in the NEJM.

I have allowed myself to envision, maybe 10-15 years from now, Jane and the other 23 kids reuniting at NIH to celebrate when selumetinib finally gets FDA approval and becomes the standard-of-care for plexiform neurofibromas.  Maybe she’ll be starting medical school at that point :)