NIH Update:
Jane and I arrived at NIH late Thursday afternoon after an uneventful flight.  This was Jane’s check-up prior to starting her 27th cycle of chemotherapy.  Within half an hour of arriving we had already been to the pharmacy to pick up Jane’s next two cycles of medication, and then Jane was off doing science crafts at the Inn.  (She created purple play dough and built volcanoes out of lemons and baking soda—“We made ours erupt five times, Mom!”)

Our entertainment during the Family Dinner at the Inn that night was a troupe of Indian classical dancers (I believe it was the Bharathanatyam form).  So beautiful and mesmerizing. 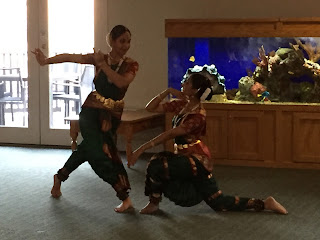 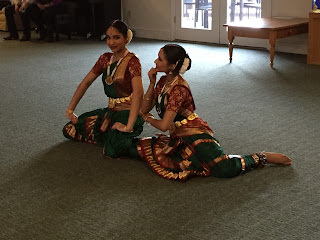 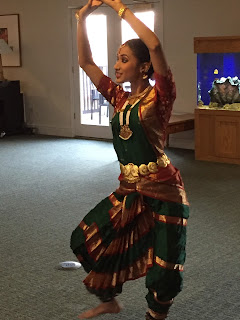 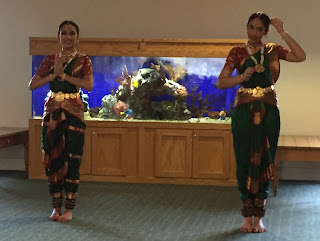 Friday morning, our physical exam and blood work day, Jane woke up with a migraine.  Migraine in Jane’s case it means a bad headache, nausea, and dry heaving for several hours.  There aren’t any pediatric medications for migraine, so we have to stick with Tylenol (when she can get it down) and just sleeping it off.  She gets these episodes about once a month, which is much better than when she was younger when she got them almost once a week.  We don’t know if it is her medication or NF itself—both can cause migraine.

We managed to post-pone our appointment time until the afternoon, and Jane had rallied by then (the signal that she had turned the corner was she asked for some chocolate milk).  Exam and blood work went well—everything looked good!  We spent some time in the clinical center playroom and then on the Children’s Inn playground before retiring back to our room.

Got up before dawn on Saturday in order to make it into Washington in time for our tour of the White House.  I felt humbled thinking of the historic significance of our surroundings.  I found it quite moving.

Jane honestly had the most fun just playing with the other kids she met at the Inn.  She spent the last bit of our morning chasing around the playground with two hearing-impaired sisters.  All Jane and the girls needed to communicate was smiles and laughter. 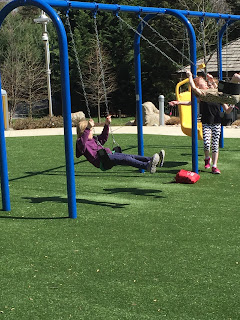 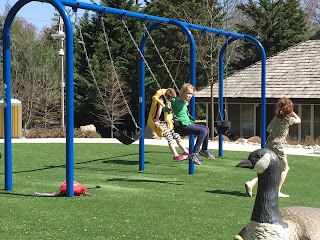 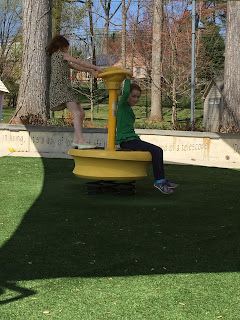 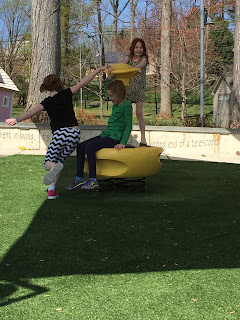 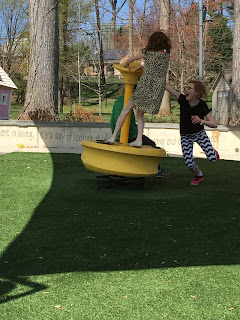 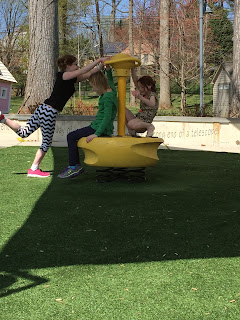 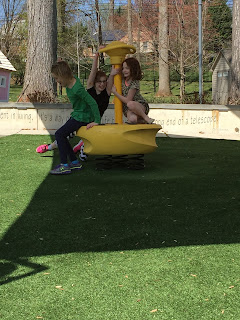 We’re back in Connecticut now, glad to be home, a bit tired from another whirlwind trip.  My mother shared a conversation she recently had with Jane about vacation time.  For context, Todd had just had a couple of days of free-time for snowboarding during a conference in British Columbia.  My mother told me, “I said it would be nice for Mommy to have a vacation also.  Jane said, ‘Oh, Mom has a vacation when she comes to Washington with me.’”  I do, Jane.  I really do <3

As always, if you are inspired by Jane to help us End NF, please donate:  www.KRath4Jane.com
Posted by NFE Mom at 4:53 PM No comments:

Running Update:
Hooray for the NYC Half Marathon!  Another race done for the Children’s Tumor Foundation today, and it was brilliant.  The NYC Half itself is amazing—big, spirited crowds and great fun to be able to run through Central Park, Times Square, and by the World Trade Center—but I also ran a personal best this morning!  I beat last year’s NYC Half time by 5 minutes, and beat my previous half marathon PR by almost a minute.  I sacrificed a toenail to the cause, but it was worth it ;)


NF Update:
We’ve had a great first week of fund raising—we have so many generous supporters!  In just one week we’ve raised $5,881!  Thank you to everyone who has donated.  Our goal for this year:  $17,500 for NF Northeast and the Children’s Tumor Foundation.  If you haven’t given this year, please do!  Here’s the link to our site:
www.KRath4Jane.com

Jane Update:
Now that the NYC Half is over I’ll turn my attention to our next task:  in four days Jane and I return to NIH for her check-up and blood work.  I planned ahead for this trip—the day after Jane’s appointments we’ve got reservations to tour the White House!  We can’t wait!
Posted by NFE Mom at 5:00 PM No comments:

Each spring John Hancock, the principle sponsor of the Boston Marathon, hangs hundreds of Boston Marathon street banners throughout the city to showcase excitement for the race. Images include elite athletes, spectators, qualified and non-profit runners, and race officials.

This year for the first time, John Hancock is providing anyone with the chance to appear on one of 26 banners that will hang on Boylston Street, leading up to the iconic finish line.  On its website you can create a personalized image of yourself on a digital banner featuring one of the following words: gratitude, passion, pride, dedication, inspired, drive, psyched, believe, heart, strength, glory and spirit. Among the entries, 26 will be made into street banners that will line the final stretch of the race on Patriots' Day.

Here is the banner I created!  I think it’s worthy of being displayed on Boylston Street :) 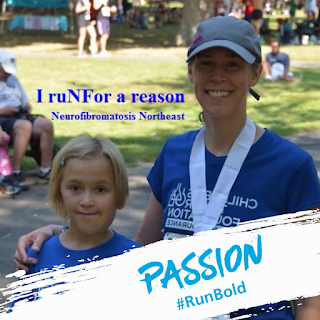 You can see all of the entries at www.jhextramile.com/runbold/submissionsgallery.

Usually we wait until after NF Awareness Month in May each year, but this year because of the Boston Marathon in April we’re starting our fundraising campaign a little early!  If you are able,
please donate here in honor of Jane!

We’ll be raising funds for both NF Northeast and the Children’s Tumor Foundation this year.  Please help us make a big splash before Boston!

Jane Update:
March 2nd was Read Across America Day in honor of Dr. Seuss’ birthday.  To celebrate it, Jane’s school has lots of special activities, including a guest who read to her class—Senator Ted Kennedy, Jr!  Senator Kennedy is our recently-elected state senator, son of Senator Edward Kennedy, and nephew of President John F Kennedy and Senator Robert F Kennedy.  He also lost his right leg to osteosarcoma when he was just 12 years old.  I hadn’t known he was going to be visiting Jane’s school, but learned it in this email from Jane’s 3rd grade teacher:

Today we had Ted Kennedy, Jr. come to the class as a guest reader in honor of Dr. Seuss’ birthday.  Jane answered many questions with a positive and lively attitude.  At the end, the children were getting autographs.  Senator Kennedy told Jane that he enjoyed the spark she possessed during his visit.  I was very proud of her and complimented her!

We asked Jane about Sen Kennedy’s visit that evening, and she excitedly ran to her backpack and produced these autographs:
Apparently Jane had asked the senator for an extra autograph for her brother and sister <3

Dear Senator Kennedy,
Thank you for reading at Jeffrey School in Madison on Dr Seuss Day! My daughter, Jane, was thrilled to have you.
I was tickled to get an email from Jane's teacher letting me know that you enjoyed her "spark". This word describes her well! Jane has neurofibromatosis and has been on various experimental chemotherapies through the NIH since she was 3 years old. As you could see, it hasn't held her back at all, and we all anticipate great things from her!
Thank you again for your attention to her, and thank you for your work on behalf of the 12th district.
Sincerely,
Kristina Rath

…and he wrote a lovely note back:
Hello Kristina,
Thank you for your email. I had a great time reading to the kids and speaking with them yesterday. It sounds as if Jane is a very strong young woman and will meet any type of challenge she comes across in her life. Again, thank you for the note.
Sincerely,
Ted
Our family agreed that maybe someday Jane will be the head of the National Institutes of Health under a President Kennedy :)
~~~

Finally, the tooth fairy will be coming to our house again tonight!  It seemed like Jane’s top front tooth was going to hang on forever, but it finally came loose today (with a helpful nudge from a friend!) 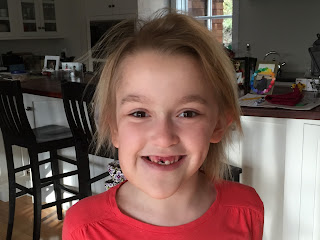