Boston Marathon 2016
Once again I have the honor to report on being part of the Boston Marathon.  I was finally able to take some time today to process everything that happened on Monday.  (I had to work yesterday--it wasn't pretty!)

There are not adequate superlatives to describe the experience of running in the Boston Marathon.  As always, the City of Boston was amazingly welcoming and supportive.  Boston is such a great town, and once again I was overwhelmed by the sheer number of enthusiastic spectators.

I was thrilled to represent NF Northeast!  I owe this organization so much gratitude for giving me such a wonderful opportunity.   NF Northeast’s Director of Development, Paul, was watching for us at mile 10 in Natick, and captured some great shots of our team. 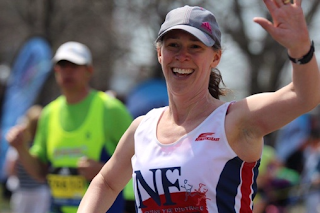 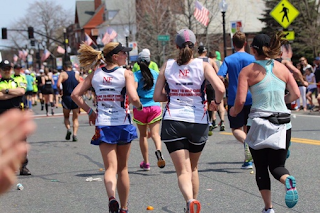 NF Northeast’s Executive Director, Karen, was waiting for us on Boylston Street—knowing she was there kept me hobbling along to the finish.

My cousin, Rob, ran the marathon as part of the Dana-Farber Team (as he has for several years), and his five sisters and their families all came out to support him and me.  I had family members stationed at mile 10, mile 12, 20K, mile 13, at the half-way mark (13.1 miles), and at mile 14!  Add my mother and her sister at mile 24, and I had inspiration along the entire marathon route.

Todd and the kids were waiting patiently for me at the finish—I couldn’t do any of this without them.  They are such good sports!  Finally, I must thank my running partner, Neil, and his wife, Marcia for their love and support. 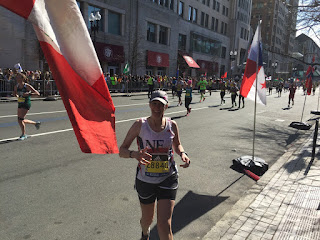 I completed the marathon in 4 hrs 45 mins, about a half hour longer than I would have liked, but I did finish.   I felt like I had trained well enough through the season, but tapered a bit too abruptly in the weeks before the race on account of an injured knee.  (Did I mention also that we were in Paris the week before the marathon?  That report will come in a later blog post, but a surfeit of pain au chocolate may have also played a role…)  And it was hot on Monday!   I ran the first half of the race but had to walk part of the second in order to make it to the finish line.

I'm less sore than I expected, but I’m looking forward to having a little break from running this next week or so.  Still, I saw this sign in the crowd near the end of the race on Monday and it aptly illustrates my feelings towards running after I finish a marathon :) 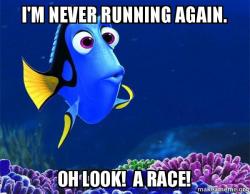 One strange side effect from yesterday's race--the backs of my calves are burnt!  I guess that's what comes from running east for 26.2 miles...  I had learned from previous races to protect my upper body from the sun, but it never occurred to me to put sunscreen on the backs of my legs!

As if our week couldn’t get any better, we received two wonderful pieces of mail the day after the marathon.  First, with the help of NF Northeast, I had requested that Governor Malloy make May 2016 officially NF Awareness Month in CT—and this is his announcement. 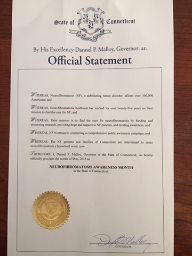 Second, a dear friend of mine from college has connections to the Obama Administration, and had requested a letter for Jane from the First Lady--this signed letter came addressed to her! 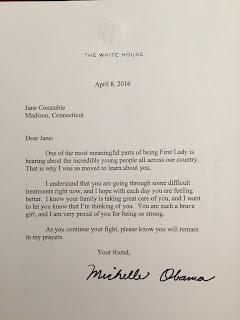 That’s enough for one blog entry!  I hope to post pictures from our Paris vacation soon.  I’ll have more to write during May for NF Awareness Month, and will update you on Jane’s restaging (including MRI results) at the end of May.  Watch this space!
Posted by NFE Mom at 5:57 PM No comments: