Summer Update:
The summer got away from me, and I took a longer break from the blog than I meant to!  We’ve had a lovely few months and are now gearing up for a new school year.  We spent the summer enjoying our usual three Cs—Cape Cod, Camp, and Canada.

After school let out in June, we spent a week in Cape Cod, biking and swimming (and avoiding sharks!) 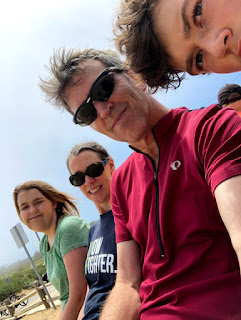 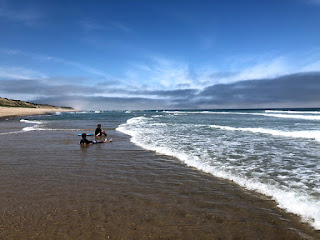 For several weeks the kids returned to their favorite camp, Deer Lake, where Jane was again a camper and where her older sister and brother were a counselor and counselor-in-training, respectively.


Then we traveled to the Lake of the Woods in northern Ontario for a nice long visit with Todd’s family and our Canadian friends where we enjoyed more swimming, hiking, paddling, and exploring. 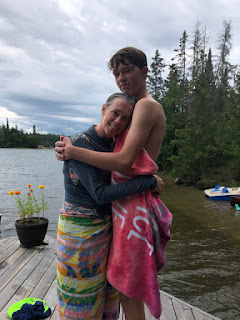 Jane Update:
The only wrinkle in our summer has been a battle with the side effects of Jane’s trial medication, selumetinib.  As I have mentioned here before, for some reason selumetinib seems to predispose users to nail bed infections (among a number of other skin concerns), and Jane has been plagued by stubbornly affected toenails since the beginning of May!  We’ve consulted endlessly with our team at NIH, we’ve seen our local pediatric dermatologist, we’ve done several courses of antibiotics, multiple rounds of topical medications, countless soaks, and finally had to take Jane off the selumetinib temporarily.  Unfortunately, she has been off the drug for almost a month and a half, which of course makes me nervous.  After four months we do seem to be finally conquering the infections.  We see the pediatric dermatologist again this week and hope to get the green light to restart the trial medication.

However, because of the long break from the selumetinib, we had to postpone our return trip to NIH.  We were scheduled to visit NIH last week for a check-up, MRI, and other testing before starting Cycle 71 of the trial.  (NB Each “cycle” is 4 weeks, so 71 cycles is 284 weeks or almost 5-1/2 years on this trial!)  Unfortunately, because Jane has been off her medication since the middle of Cycle 70, we were forced to postpone the visit by a month, until she truly is starting Cycle 71.

Can I tell you how hard it is to rearrange a medical trip with a child on only a few days’ notice?  NIH could not have been more helpful, and the changes to actual travel plans were handled by them, but the delay meant rearranging my work schedule and childcare plans, and means Jane missing school again (which we were trying to avoid with a summer trip).  When I first heard that our trip was being postponed, I was distraught and overwhelmed by the logistics of it all!  But we’ve since rallied and made the necessary changes and now we hope to visit at the end of September.

Of course, I am anxious about Jane having been off selumetinib for a month and a half.  This is the longest period of time Jane has been off the medication since we started 5 years ago.  At one point I asked one of our care team if she had concerns about Jane being off it for so long, and if we would see any significant growth in her tumor as a result.  While she meant to be reassuring, her answer threw me off: “Well, it is what it is.  We don’t have any choice but to hold it for now.  There are some children who have to be off the study medication for months due to surgery, and keep in mind that when she’s older if she is pregnant, she’ll have to be off the medication for 9 months.”  I was taken aback because it had always been my understanding that plexiform neurofibromas stop growing at some point—I hadn’t envisioned Jane taking this medication for the rest of her life.  But our team member said that they still really don’t know everything about the natural history of plexiforms.  At one point it was thought that plexiform neurofibromas can stabilize during the teenage years, but this is unpredictable.

Meanwhile, Jane is her usual easy-going self, and is looking forward to starting grade 7 and being back at school with her friends.

Five days until my first race of the fall, the New Haven Road Race Half Marathon!  (You can donate to our race here! www.KRath4Jane.com)

I started the summer swimming more than running on account of the excessive heat and humidity in the northeast, but I got in a lot of running miles while we were in Canada.  It’s perfect running weather there--sunny but cool and dry--plus I’m rewarded with dip in the Lake at the end of every run.  Back at home now I’m just getting into my long runs on weekends in the lead up to the Marine Corps Marathon in October.

NF Update:
This summer I’ve added something new to my resume.  I was invited to join the Medical Advisory Board for the Childhood Tumour Trust!

The Childhood Tumour Trust is an organization based in the UK that is similar the Children’s Tumor foundation here in the US.  I will continue to race and fund-raise for the Children’s Tumor Foundation, but for a while I have wanted to use both my medical expertise and personal knowledge of NF to further support individuals and families affected by NF, and I will be able to do that in this new position with the Childhood Tumour Trust.

Finally, I’d like to dedicate this blog post to my dear Aunt Anne, who passed away this week.  She was the rock of our extended family and lived a full life filled with love.  She doted on Jane and was always a steadfast supporter in our quest to end NF <3