Jane (and Family) Update:
The kids had an unusual four-day school break this week (even though school just started), so we took advantage of low fares and headed to Orlando, Florida to visit the Wizarding World of Harry Potter!  All three kids—and I, of course—are Harry Potter crazy, and we’d never been to Florida together, so it seemed like a perfect occasion to travel there.

The excitement started as we were getting off the plane in Florida and the PILOT RECOGNIZED JANE!! His daughter goes to Jane's school! He let us see the cockpit! 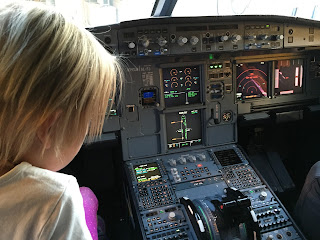 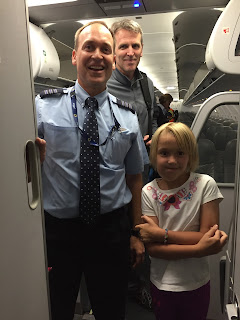 Once at Universal Orlando we had the time of our lives.  We explored the shops in Diagon Alley and Knockturn Alley, entered Gringott’s Bank, rode the Hogwarts Express, and visited Hogsmeade and Hogwarts castle.


If you are not Harry Potter crazy, you may choose to skip this next story:

Several times we attended a small performance at Olivander’s in which one of the “Wand-Keepers” re-enacted the scene in the shop when Harry purchased his first wand, except a child from the audience was selected to participate in Harry’s place.  During one of the shows BOTH Alec and Jane were selected to have a wand “choose” them.

Alec went first.  The Wand-Keeper (a witch, by the way) gave him a wand—willow, with a dragon heartstring core—and asked him to levitate some wand boxes.  However, when Alec commanded, “Wingardium Leviosa!” a stack of boxes fell from the shelf!  Then Jane was given a wand to try—holly, with a dragon heartstring core—and she was asked to lighten the room.  When Jane shouted, “Lumos!” she started a lightning storm!  The Wand-Keeper then had an inspiration (“I wonder…”), and switched the wands.  Both wands shone and a magic wind blew, and we knew then they had been given the right wands...

The wand keeper went on to say that having been chosen by a holly wand indicated that Alec would make a good leader, and that a willow wand indicated that Jane would be valued for her friendship and cooperation.  Finally, she announced the fact that the dragon heartstring in each of their wands came from the same dragon meant that they would always be loyal to each other. 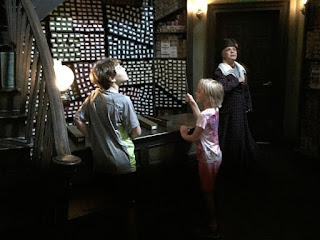 NF Update:
We Braved the Escape from Gringott's ride one morning. The porter at the entrance appeared to have a classic trigeminal plexiform neurofibroma, so I stopped to talk to her. I told her my daughter has NF, and she said that she did, too! She said hello to Jane, and then she let us go to the front of the line :)


Yes, I ran while we were in Florida.  I didn’t want to get behind by too many miles, since the Hartford Marathon is less than a month away.  Plus I had to burn off some of that Pumpkin Juice and Butterbeer!  We had downtime each afternoon after spending the morning in the park, so the kids cooled off in the pool while I ran.  I was afraid to run on the city streets (I found the presence of sidewalks inconsistent) and jogging isn’t allowed in the park, so I limited myself to a three mile loop around the hotel complex.  It was quite lovely, through gardens and along a man-made river, and with little, tiny lizards scattering from my path as I ran—I don’t see that in Connecticut.
Posted by NFE Mom at 6:51 PM