Another NIH visit done!  Here’s an overview of the last 3 days:

The Wednesday afternoon we arrived the Children’s Inn had some special activities in store for us.  Jane got to participate in a play performed by Only Make Believe.  Only Make Believe is a non-profit organization that creates and performs interactive theatre for children in hospitals and care facilities.  We had seen them perform last summer when were at NIH, and this show proved equally entertaining! 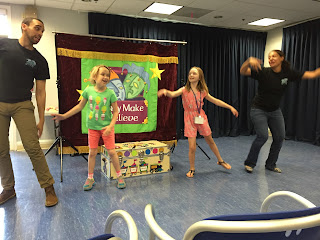 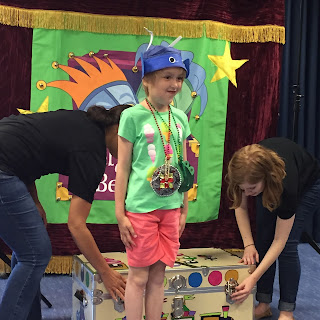 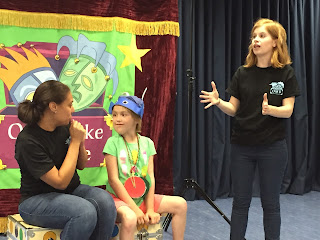 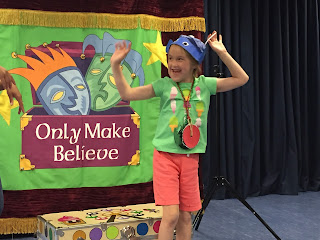 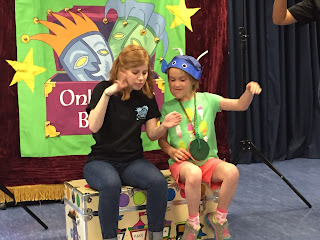 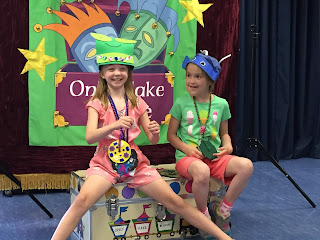 Later on we made home-made play dough and indoor snow.  Jane also became fast friends with a little 9 year old girl from Austin who was visiting NIH for evaluation of a rare skin disorder.

On Thursday—the first day of our clinical appointments—we checked into the hospital 8:45am and out of the hospital 3:45pm. Whew!  Jane handled it with grace and was in good spirits.  We showed our sonographer Jane's diorama of the Lego ultrasound and we showed our MR radiologist Jane’s Lego MRI suite—both were duly impressed.

We shared and learned some new jokes.  Jane had fun tricking various people with, “Mississippi is a long word.  How do you spell it?”  [Answer:  “I-T!”]  Jane was tricked in turn by a nurse who thought she looked bored.  He said, “I can prove you’re excited!  Knock-knock!”
“Who’s there?”
“Woo.”
“Woo who?”
“See!  I told you you were excited!”  (Jane liked that.)
We also shared a joke our sitter, Brittany, had taught us:  “How many tickles does it take to make an octopus laugh?”  [Answer:  “Ten-tickles!”]

When we arrived back at the Inn after our long day I was puzzling over how I could go about getting Jane's medication diaries back to the hospital (I forgot them that morning) without dragging Jane along with me, when two of the Children's Inn staff offered to watch kids in the playroom in order to give parents an hour's break.  I love that place sometimes.

Friday morning I did not handle things as gracefully as Jane did.  I did a full-on Momma Bear when the anesthesia team mistakenly thought that Jane was having a 3 hour full-body MRI (instead of the 90 minute face and orbits scan that was ordered—there’s a big difference between a 90 minute scan and a 3 hour scan when you're under anesthesia) and didn’t listen to me when I told them I didn’t think it was right.  I was so angry!  I felt like I was watching one of those movies hospitals show their staff illustrating the importance of communication between members of the care team in order to avoid medical mistakes.  I can be ugly when it comes to health care providers who don’t listen (especially when I haven’t had coffee yet!)  This is why we do pre-procedure time-outs, people!!

We checked into hospital 7:25am and out of hospital 2:55pm with only a few bumps along the way, but the upshot of the day—a STABLE tumor! 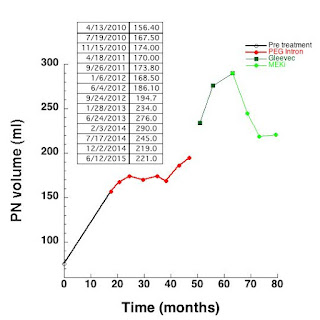 We met with Jane’s neuro-oncologist, Dr. Brigitte Widemann, who was pleased with the results.  She said in her patients taking AZD6244 it has been very typical to see a plateau of tumor volume after about a 25% decrease (Jane’s was 24%).  The fact that Jane's tumor is still responding in this typical fashion, despite Jane being on a lower dose of the medication, is even more encouraging.  Dr. Widemann recommended staying at the lower dose, and reassessing again in 6 months.  I was disappointed at first that we hadn't seen any further decrease in the size of Jane's tumor, but I am relieved that Dr. Widemann was so pleased with the results.

I’m going to show one more set of pictures—it’s a bit confusing at first if you are not used to looking at MRIs, but what follows is a side-by-side images of the same slice of Jane’s tumor from 2/2014 compared with now.  Tumor is the big white blob on the left of the image.  You can see in some spots where it appears to have just melted!  (You can also see from these images why her tumor can’t be surgically removed—it wraps around everything.) 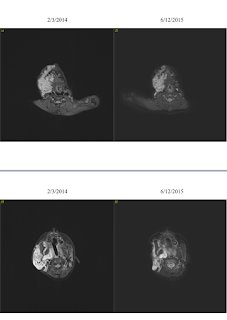 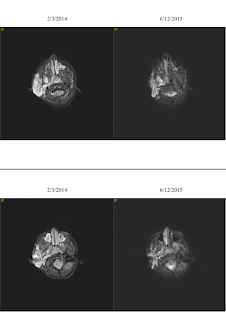 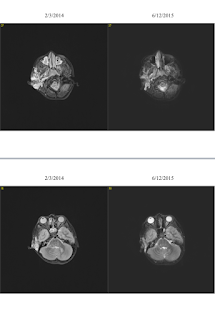 Friday afternoon we spent back at the Inn chillin' with some DanDTM videos (Minecraft :/) and with Jane drinking an Oreo milkshake.  (Mmmm!)  She was still feeling sleepy from her anesthesia, but said, "I'm just going to drink my shake to get my energy back."  Over the course of three days we burned through several volumes of Jane’s new favorite chapter book series—The Littles.  (One of my childhood favorites, too.)


Here we are at the airport, awaiting our flight home.  I'm looking pretty worn--definitely think these trips age me! 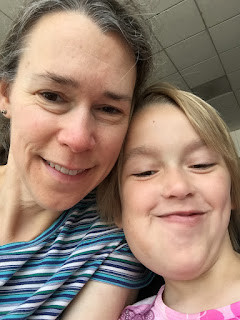